Nadeem became the 296th from India to be handed a Test cap.

Left-arm spinner Shahbaz Nadeem became the 296th from India to be handed a Test cap. Nadeem, added in the squad a day before the third Test in Ranchi as cover for the injured Kuldeep Yadav, was included in India’s Playing XI, coming in for Ishant Sharma, who was rested for the final game of the series.

One of the most consistent performers in the domestic circuit, Nadeem has taken 424 First-Class wickets and holds the distinctive record of taking more than 50 wickets across two successive editions of the Ranji Trophy in 2015-16, 2016-17. He’s led India A to wins in New Zealand and England, and been the linchpin of Jharkhand’s rise in the Indian domestic circuit.

Big day for Shahbaz Nadeem as he is all set to make his Test debut ???? #TeamIndia #INDvSA @Paytm pic.twitter.com/3hfYTaVyDL

In July earlier this year, Nadeem was at the forefront of India A’s success against West Indies A when he claimed a match-haul of 10 wickets. He took 5/62 in the first innings and followed it up with figures of 5/47 in the second. It was Nadeem’s fifth 10-wicket-haul in a match. More recently, just last month, Nadeem orchestrated another handsome win for India A, against South Africa A.

Last October, Nadeem earned his maiden India call-up for the three T20Is against West Indies, and although he hasn’t represented his country yet, the left-arm spinner was happy with the way he was making progress. His selection came on the back of a List A record, which saw Nadeem return the best figures in the format.

Playing for Jharkhand in the Vijay Hazare Trophy 2018-19, Nadeem picked up 8/10 against Rajasthan, skittling them 73. He broke a 21-year-long record that was held by Mumbai’s Rahul Sanghvi and joined a list where names like Chaminda Vaas and Michael Holding are now behind him. 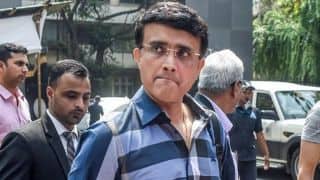 Wish Ganguly gets more than 10 months in charge: Gambhir