Rohit Sharma fell in the fourth over as India lost their first wicket in chase of 173 against South Africa in the ICC World T20 2014 semi-final at Dhaka on Friday. India were for 39 one after 3.5 overs, with Ajinkya Rahane batting on 13. India need another 134 runs to win.

Rohit Sharma and Ajinkya Rahane provided India a rollicking start as the two batsman are looked aggressive at the crease.

Rohit hit a six off Dale Steyn in the third over to mark an impressive start, as earlier all the bowlers were punished by the Indian batsmen.  JP Duminy began proceedings for South Africa in the run-chase. Rohit got the first run on the board with a single towards square-leg.

Rahane cut a short and wide delivery from Duminy in front of point and got of the mark. Rohit then edged one past Quinton de Kock for a four. He then came down the track and thumped one through long-off for another four.

Albie Morkel shared the new ball with Duminy. He bowled one short and wide and Rohit cut it behind point for a four. Rohit then pulled another short delivery over mid-wicket for a four.

South Africa set a huge 173-run target against India in the ICC World T20 2014 second semi-final at Dhaka. Faf du Plessis scored a fluent half-century and JP Duminy scored 45 not out to take their side to a strong total. The two batsmen added 71 runs for the third wicket to take South Africa to a strong position. 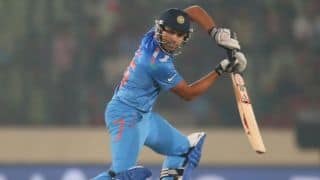 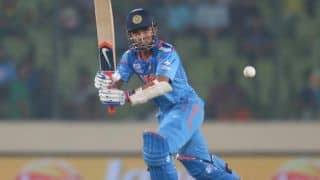