India need a further 79 runs to win from 48 balls with eight wickets in hand.

India reached 94 for two after 12 overs, chasing 173 to win against South Africa in the ICC World T20 2014 semi-final at Dhaka on Friday. India need a further 79 runs to win from 48 balls with eight wickets in hand.Virat Kohli was batting on 27, while Yuvraj Singh was on four.

Kohli is key to India’s chase as they need another 79 runs to win to reach the summit clash of the tournament. On the other hand, Yuvraj, who has started off on a cautious note will be looking to repeat his performance from the last game.

Ajinkya Rahane fell in the 10th over after scoring 32 off 30 balls, studded with two boundaries and a six.

Rohit Sharma was the only batsman to be dismissed in the chase. He scored 24 runs off 13 balls.

Ajinkya Rahane was batting on 28, while India’s batting mainstay Virat Kohli was on 12 not out.

Rohit fell in the fourth over as India lost their first wicket in chase of 173. Rohit struck four boundaries and a six to score 24 quick runs while opening the innings. He added 39 runs for the first wicket with Rahane.

South Africa set a huge 173-run target against India in the ICC World T20 2014 second semi-final at Dhaka. Faf du Plessis scored a fluent half-century and JP Duminy scored 45 not out to take their side to a strong total. The two batsmen added 71 runs for the third wicket to take South Africa to a strong position. 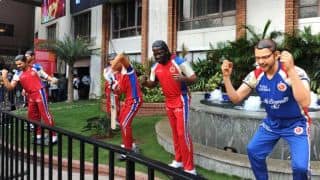