South African Test captain Hashim Amla has said that he wants his misfiring batsmen to play to their potential when they will take on India.

Bengaluru: South African Test captain Hashim Amla has said that he wants his misfiring batsmen to play to their potential when they will take on India in the third Test in Nagpur next week. “It would have been great for us to get some confidence after the poor starts with the bat but Nagpur is a different Test and hopefully that is when it starts,” Amla told reporters after the second Test was washed out by rain. The tourists failed to overturn their batting slump as they struggled against India’s spin attack before being bundled out for 214 in their first innings during the rain-marred Test in Bengaluru. FULL CRICKET SCORECARD: India vs South Africa, 4th Test at New Delhi

“From a team point of view I don’t see a lot of positives to take to be honest, but every time there is a disappointing session or a disappointing day of cricket it is the reflection that happens afterwards that is more valuable than most things,” the captain added. South Africa are trailing 1-0 in the four-game series after losing the first Test by 108 runs in Mohali.

Meanwhile, with four days rained out in the second cricket Test, South African captain Hashim Amla candidly admitted that he could not take out a lot of positives from the rain-truncated game apart from AB de Villiers knock of 85 in his 100th game. Amla was quoted as saying by PTI, The most I can take out of it is similar to what I took out of Bangladesh, when the games got rained out. Dale got 400 Test wickets and we held on to that. Now AB played his 100th Test and did pretty well. We re pretty chuffed about that. From a team point of view, I don t see a great lot of positives to take out, to be quite honest with you. Every time there s a disappointing session or a disappointing day of cricket, it s a reflection that happens. That reflection is probably more valuable than most things, Amla said at the post-match conference. 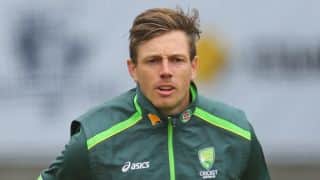