For India, a whitewash will be a reality check for captain Virat Kohli, who is already under fire for his selection policies and arrogance .

There are no dead rubber games and we are well prepared and keen to win the third Test, Vernon Philander has made South Africa s intentions clear. Two years back, South Africa returned with 0-3 from India. To return the favours, this is the scoreline South Africa have in mind this time.

True, the third and final Test of the series at Johannesburg is far from being a dead rubber . A win for South Africa will see them cruise to 116 rating in the ICC Test Ranking, much closer to the No.1 ranked India in decimals.

For India, a whitewash will be a reality check for captain Virat Kohli, who is already under fire for his selection policies and arrogance . For all the records that he has notched, including the nine consecutive series wins, Kohli s side faces the prospect of being the first Indian side to lose all Tests in South Africa.

India s coach Ravi Shastri admitted that the team could have benefited had they arrived two weeks prior. However, that did not happen and the results are to be seen. Batsmen have struggled to cope with the pace and bounce. Having spent over three weeks in the Rainbow nation now, Indians should be more acclimatised to the conditions.

India lost at Cape Town by 72 runs and on a much friendlier surface at Centurion; the visitors suffered a 135-run defeat. It s set to be a green welcome at Johannesburg, which already swings the balance in South Africa s favour.

To Kohli s solace, Johannesburg is one place where India haven t lost a Test.

Skhumbozo Bethuel, the groundsman at the Wanderers, has promised a result pitch, one that will have pace and bounce than lateral movement. He may or may not trim some grass ahead of the Test.

It has been overcast at Johannesburg and rain may play spoilsport on all days of the Test. The surface looks green and unlike the more subcontinental Centurion, expect ample pace and bounce. Temperature is expected to be in comfortable early and mid-20s. Overcast conditions, higher altitude and a green track will make this pacer s paradise.

On the match eve, Kohli said, There is lot of grass on pitch. We will definitely look at that option (playing all pacers).

The conditions might force Ravichandran Ashwin to sit out and as Kohli suggested, it could be an all pace attack.

These are conditions where Bhuvneshwar Kumar may thrive. Bhuvi, who was mysteriously left out at Centurion, is expected to replace Jasprit Bumrah. Ishant Sharma and Mohammed Shami should hold onto their place.

Considering the amount of grass at the track, it is unlikely that Shikhar Dhawan, who struggles against movement, will return. Despite all the criticism, Rohit Sharma, who averages just over 19 in this series, may hold on to his spot and also bowl off-spin alongside Murali Vijay, if required.

Ajinkya Rahane had batted longest in nets and therefore it is certain that after missing out the first two games, the Indian vice-captain won t be warming the benches at Wanderers. What it does is, strengthens India s slip cordon, their perennial weakness off late.

Parthiv Patel s failure with the bat and behind the stumps proved critical. However, the team management will like to give him another opportunity rather than throwing Dinesh Karthik in the lion s den right away.

India s worst result in South Africa came in 1996-97, when they lost 0-2 under Sachin Tendulkar. At Wanderers, Dravid scored his maiden Test hundred and India almost pulled off a win.

A green surface suits South Africa more than the visitors but this also gives India an opportunity to seal a win. Remember, what Sreesanth did here, in 2006-07?

Faf du Plessis was livid with the surface at Centurion. Indians had dished out rank turners in 2015-16, and the Centurion track gave India the best opportunity to square the series. The Wanderers track should make him smile though as more chin music will be on offer for the visitors

We were quite surprised when we realized India have changed their playing XIs in 34 straight Tests. I don’t think it’s something we can ever do, South African skipper du Plessis said at the press conference.

Aiden Markram sustained a thigh strain during the Centurion Test and will be expected to be fit. Though South Africa are eyeing a whitewash, they may be tempted to test their fringe strength ahead of the challenging Australian tour.

A 3-0 here, and 2-0 against Australia, can see South Africa displace India from the top spot of ICC Test Rankings.

The grassy affair at Wanderers may tempt them go for Theunis de Bruyn or Andile Phehlukwayo (Chris Morris is away for paternity leave) in place of their sole spinner Keshav Maharaj. If needed, Dean Elgar can chip in with his left-arm spin. 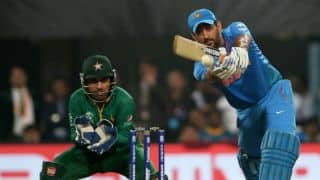