The live telecast of fourth ODI can be watched on Sony Ten 1 and Sony Ten 1 HD.

India are sitting pretty courtesy back-to-back wins versus South Africa in the ongoing six-match series. They have taken an unassailable lead, and would press hard for their maiden bilateral series win in South Africa. Nonetheless, the going won’t be easy with the return of AB de Villiers. The right-hander, after nursing a finger injury, will be back and eager to make a roaring comeback with his side trailing 0-3. The fourth ODI will be played at Wanderers, Johannesburg.

In addition, the fourth match will be South Africa’s much-awaited Pink ODI. The purpose of playing the match in pink is to spread the awareness of breast cancer, and for the benefits of those suffering from the disease. South Africa and India have been involved in one such encounter in 2013-14. India lost the encounter by a whopping 141-run margin. To fan the fire, South Africa are yet to lose an ODI in pink. Also, de Villiers enjoys a brisk run in Pink ODIs. He smashed a 49-ball 148 against West Indies in 2015, and registered a quickfire 47-ball 77 versus India in 2013.

If India edge past their opposition on Saturday, they would create history by winning their maiden ODI series in the African nation. Their wrist spinners Yuzvendra Chahal and Kuldeep Yadav have accounted for 21 out of 27 wickets. The onus will again rest on their shoulders. 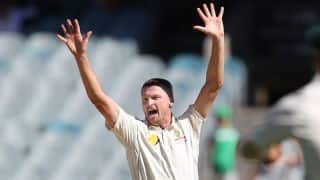 Jackson Bird hit by injury ahead of South Africa tour