South Africa were taken aback ahead of the second ODI against India on Sunday, as skipper Faf du Plessis has been ruled out of the ODIs as well as the T20I series due a finger injury. Du Plessis is said to have suffered a fracture while fielding in the second innings at Durban. The home team trail India 0-1 after losing the Durban ODI by 6 wickets.

South Africa are already without AB de Villiers, who was ruled out of the first three ODIs. A stand-in captain for the second and third ODI will be named on Saturday. Farhaan Behardien has been called in as replacement for du Plessis, while Heinrich Klaasen earned his maiden ODI call-up for Proteas.

Thanx for all the kind messages.Not a result we wanted in the 1st game but a lot of cricket left in the series.Gutted to be out injured for the rest of the series with a fractured finger.looking forward to see some big performances from the men in green and gold.

Du Plessis will undergo rehabilitation and will be out of action for 3-6 weeks. He will aim for a comeback in the Test series against Australia, starting March 1. 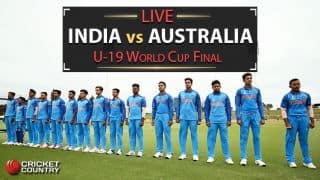