The numbers are heavily stacked in India’s favour who have won 9 of the 15 matches played between these sides, while South Africa coming victorious in just 4; one ended in no-result.

One of the only two teams to remain unbeaten in the ongoing ICC Women’s World Cup 2017, India will take on the inconsistent South Africa. Having won 4 out of 4 ODIs in the tournament, Mithali Raj’s side have made their position stronger across departments with every game. South Africa, on the other hand, have shown glimpses of their capabilities as a side. Another win here would almost take India to the semi-finals, while a loss for Dane van Niekerk’s girls will make their road to semi-finals quite a bumpy one.

Both India and South Africa have recently played quite a few ODIs against each other; in the Quadrangular in South Africa and in the World Cup Qualifiers. While India were the eventual winners in both competitions, South Africa did manage to halt The Eves’ 16-match unbeaten streak during their 8-run win at hime. The numbers are stacked in India’s favour: they have won 9 of the 15 matches played between the sides, while South Africa coming victorious in just 5; one ended in no result.

South Africa, surprisingly, have never beaten India in neutral venues or in World Cups. India hold a 3-0 record in both cases.

The Indian team is oozing with confidence in all fields in both batting and bowling in this edition. While Smriti Mandhana (206 runs) set the tone with runs in the first two matches, Ekta Bisht (7 wickets) has been strangling her opponents into submission with her left-arm spin. Smriti has been ably supported by Mithali Raj, Punam Raut and Deepti Sharma; Deepti has contributed with ball too, as has Poonam Yadav; more ominously, Jhulan Goswami has shown glimpses of returning to form.

India will be tempted to bring in Shikha Pandey, whose all-round skills will add another dimension to their line-up. As mentioned in the press conference by Mithali, India will also want to show more tightness in the fielding. They can take inspiration from the England match, where they pulled off four spectacular run outs.

South Africa, on the flip side, have been relying much on the likes of Shabnim Ismail, Marizanne Kapp, Laura Wolvaardt and Lizelle Lee to get their side across the line time and again. Marizanne is leading the chart with most wickets (8), while Lizelle is their best batter with 161 runs.

The failures of Trisha Chetty, Mignon du Preez and Chloe Tryon have hurt South Africa more than they would have wanted. To make things worse, Andrie Steyn has suffered an ankle injury during a training session and has been ruled out of the World Cup; she has been replaced by Odine Kirsten.

While their bowlers have restricted teams to 206 and 48, they were also taken to the cleaners by England, going for 373.

Indian batswomen can exploit their low confidence and build on their misery yet again. The likes of Marizanne, Shabnim and Sune Luus will surely be a challenge to nudge for an in-form Eves’ making this affair a mouth watering prospect for all to feast their eyes on. 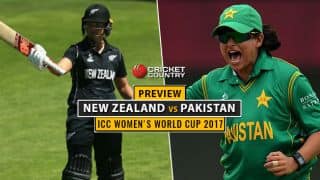