Ishant gives Petersen some room and is carted away through point for a four. That was a very well played shot, with total control there. Jadeja bowls on Petersen’s pads and is put away through fine-leg for a four. Both batsmen calmly dealt with the last few overs as they can now resume tomorrow. A fresh start beckons and India would need something like Steyn to get back in the game. So do join us tomorrow for the match.

Jadeja has Smith in a bit of a tangle as a few deliveries turn into him. However, Peterson then charges to him and lofts him down the ground for a four. These two have now moved past fifty and look very well set in the middle. There is no disturbing them as they seem determined to see it through to stumps.

The scoring was way above six an over and it has slowed down now. Mohammed Shami and Ishant Sharma are bowling from either ends and have been pitching it well. Ishant has gone past the outside edge of Alviro Petersen on a few occasions. He forced the Petersen to move back and forth and kept him clueless about the length.

Good start from South Africa. The bowlers have been off target and Petersen-Smith have taken advantage of that. Two boundaries each scored in the first two overs. Zaheer gets his length back in the third over.

That was remarkable collapse from India. 320 for five to 334 all-out. Ajinkya Rahane manages to complete his maiden Test half-century. Morne Morkel finishes the innings by dismissing Mohammed Shami for one.

JP Duminy has been brought into the attack and the Indian batsmen are easily working their way for a few runs on offer. Steyn gets Dhoni! The Indian captain was looking very well set and then suddenly, he plays at a full delivery from Steyn and edges it to Graeme Smith at first slip. An important partnership comes to and end. Dhoni gone for 24.

Ravindra Jadeja walks in and is squared up by Steyn first up. He comes on to face Duminy and edges the ball to first slip. Jacques Kallis accepts it and that is his 200th catch!

1o8th over turns out to be dramatic: Zaheer flashes at one and the edge is taken brilliantly by de Villiers. A ball later Ishant is caught by de Villiers for four.

Morkel gives Dhoni width and he cuts hard behind point for a four. That was very well played and you cannot give him that room. He gets another one from Morkel, although a touch closer to him, and he plays a similar shot to make it race past point for a four. Rahane then drives Peterson handsomely through the off-side and it goes past the diving fielder at point. That gets India their 300. Peterson then gies it more air and Rahane edges it through third-man for a four.

Robin Peterson is into the attack and Dhoni is trying to use his feet to him and attack him. Rahane is continuing solidly after tea and is hitting the ball well. He is also getting right behind the line of the ball and playing it with conviction. This too would be an extended session as they would have to bowl a certain quota of overs given the time lost.

Morkel then pitches it short and Rahane cuts it over the infield and it goes to the boundary for a four. He is growing in confidence with each passing minute.

A balanced session as India end on 271 for five. Dale Steyn ended the wicket drought with three quick wickets in the first spell. But Ajinkya Rahane and Virat Kohli rebuilt the Indian innings from 199 for four. Read the tea report here.

Second wicket to fall today down the leg-side. Morkel drops it a touch short and drifting down the leg. Kohli tries to direct it behind the wicket but gets a thick edge and it is brilliantly caught by AB de Villiers behind the wicket. So India losing a wicket just at the brink of tea.

Ajinkya Rahane is making a good presentation of his sound technique here. Steyn is testing Rahane with short-pitch bowling. But Rahane is up to the task dealing with it. He has been hit twice since the new ball has been taken. Once on the helmet and then near the right shoulder. In the 87th over, Steyn drops one more short ball and Kohli rolls his wrist and pulls it for a boundary. These two have completed a valuable 50-run partnership.

Steyn returns after a short break. Rahane tries to get out of the way from one, but, it hits him on the head. The crowd cheer as Steyn is very much on song. Philander then bowls a bit short to Kohli and he cuts him through point for a four. Kohli then punches a nice on-drive and runs three. These runs are going to help India get back into the groove. Finally, Rahane pulls a short one from Steyn and it goes to the boundary. It was a very well controlled shot and it travels to the boundary along the ground.

Kohli gets the hat-trick ball away to the boundary as he flicks it across the leg-side. Rahane gets off the mark when Robin Peterson comes on to bowl. India have now moved past 200 and this Test match has certainly taken a turn.

Morkel continues to bowl short and fast. Vijay manages to work a single away to fine-leg and get off strike. Steyn has taken a wicket after 69.2 overs. It is certainly too long a gap for a bowler like him. And, he is breathing fire here! Vijay drops his hands to a short delivery and it takes his body as it goes to the slips. That was a good short ball. Vijay also gone now! A short ball down the leg-side and he edges it to de Villiers. And Rohit goes as well! First Ball! He lets a ball go through and it comes back in to hi

Dale Steyn resumes from the other end and has Vijay leaving outside the off-stump. One ball shapes in and Vijay lets it go through. He then pitches it full and Vijay chases it. However, it goes between the only gap in the slips for four. He moves to 95 now. Vijay then works a single through the leg-side to take the strike back as a new over beckons.

Steyn runs in again and gets Pujara to edge this time. Again, it goes through that gap between the slips. Steyn sighs! Could have had two by now! Pujara then guides one behind point with control and runs two. It looked like he was trying to do the same when he got the edge and was lucky it didn’t go to a fielder. Morkel is keeping Vijay quiet and is making him wait for his ton as he leaves a few short ones.

Pujara gone! Steyn overpitches and Pujara gets a thin edge to the wicket-keeper! Steyn picks up a wicket after a long time. This was coming.

Cheteshwar Pujara takes strike as play resumes. Morne Morkel starts off and bowls a few short ones. There isn’t much in the pitch and Pujara lets them go through to the wicket-keeper quite easily. Morkel then pitches it full and Pujara gracefully drives it through the covers for a four. The ball slows down considerably as it reaches the boundary, but it nevertheless, crosses the mark.

We have some great news for all fans waiting for the game to begin. The match will start at 12:40 local time, which is 16:00 IST. Miraculously, it is sunny at Durban and it is quite a change from what we saw early on. Hopefully, we have a full day’s play today. Murali Vijay would be looking forward to this opportunity to get his ton.

The rain hasn’t stopped at Kingsmead, Durban. As a result, lunch will be taken at 11:30 local time. However, it doesn’t look good as the covers are on and there is quite a lot of water on them. So, we can only wait and hope that the rain goes away and more importantly, stays away when the game starts.

It’s still drizzling in Durban. The umpires have announced that lunch will be taken at 11h30. #savind

Light drizzle has delayed the start of play. But the rain has stopped and the covers are coming off but the outfield is still wet. The players are warming up on the field.

Light drizzle at Kingsmead this morning. Covers are on, play unlikely to start at 09h30 #savind pic.twitter.com/NEfY0zhYp8

Welcome to CricketCountry’s coverage of day two of the second Test between India and South Africa at Kingsmead, Durban. At the end of first day’s play, India were placed firmly on top at 181 for the loss of one wicket. Day one could not witness the full quota overs to be bowled in a day because of bad light. India’s Murali Vijay and Cheteshwar Pujara are not out on 91 and 58 respectively. Both of them have looked solid in defense against Steyn and co. Vijay will be eyeing his maiden century away from home.

Hopefully we can get the full quota of overs today, with an early start expected. It will also be interesting to see how the pitch behaves today. Last night, it played more like Delhi than Durban. And with this Test being Jacques Kallis’s last, you can expect a full house at Kingsmead. I am Nishad Pai Vaidya and will take you through the day’s play. 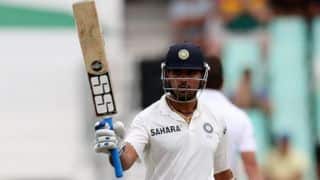 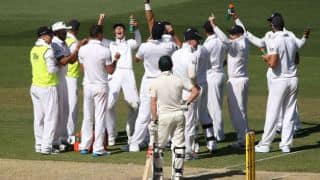