It is not a hidden fact that Rohit Sharma had had a quiet start to his international career. In 2010 he averaged 38.76. In 2011 it went past 50. It again dropped to 12 in 2012. In short, Rohit’s true potential was never noticed due to his consistent struggles. However, the script changed emphatically since 2013. MS Dhoni and the team management realised they can use him as an opener, and Rohit didn’t disappoint since: he has never averaged below 50 in any calendar year.

Rohit, however, has struggled in the ongoing South Africa tour. His scores read 11, 10, 10, 47, 20, 15, 0 and 5 (including Tests). In the ODI series, Rohit averages a mere 10, including another failure at Johannesburg. In addition, this is his worst average in a series since being promoted up the order. After 2013 Champions Trophy, Rohit has averaged below 30 on (only) four occasions, including the present series.

The current ODI series is Rohit’s worst as an opener. His struggles were evident even in India’s last South Africa tour in 2013. In the three-match series then, Rohit had failed to get going and finished at 18.50.

The big question is: will India give Rohit a breather? With Ajinkya Rahane suitable for the openers’ slot, Rohit can be made to warm the bench in the upcoming matches. On the other hand, Rohit is known to play a match-winning innings in every series. Will the concluding ODIs prove beneficial for the right-hander? 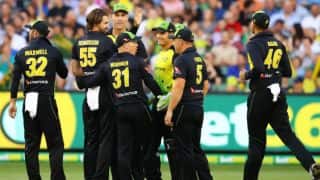