India‘s plan was to see off the first hour of Day Two. South Africa pacers Vernon Philander and Dale Steyn were breathing fire. Cheteshwar Pujara and Rohit Sharma were hurled with a barrage of bouncers. Philander conceded the first run off his bowling in his 34th delivery. India played out successive maidens in order to soften the red cherry and consolidate later. Nonetheless, they lost Rohit before lunch and are still trailing South Africa by 210 runs.

Philander and Steyn commenced proceedings. Steyn clocked over 140 kmph at regular intervals putting his shoulder injury in the past. Pujara, on the other hand, did what he does best; i.e. keeping the balls on the ground and watching it till the end. Meanwhile, Rohit played with straight bat and looked comfortable on the back foot. He got off the mark on the 18th delivery.

Faf du Plessis, sensing India’s blockathon approach, made two changes. Morne Morkel and Kagiso Rabada took the onus. While both the bowlers found time to settle in, Rabada provided the breakthrough. He trapped Rohit on a slightly fuller delivery which swung in a bit. A hapless Rohit took the decision upstairs, only to delay the inevitable. He departed for a fighting 59-ball 11.

Ravichandran Ashwin India’s chief contributor in South Africa’s 0-3 drubbing in 2015 was hit on his right (bowling) thumb in his first delivery. Faf continued to attack. He employed a leg slip and invited Ashwin to play the upper cut by appointing a third man. Ashwin shuffled and played on the up to keep the scoreboard moving. He is unbeaten on 12.

India have a humongous task to come close to South Africa’s 286. For that to happen, ‘Test specialists’ Ashwin and Pujara will have to slog it out in the middle. The batsmen waiting in the wings are: Wriddhiman Saha, Hardik Pandya and Bhuvneshwar Kumar followed by the tail. 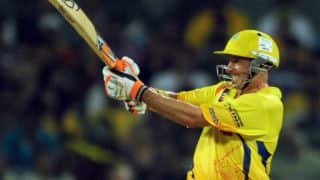