In a brief spell of cricket, Suranga Lakmal emerged hero with figures of 4.2-4-0-2.

Suranga Lakmal had India at his mercy on a rain-marred first day of the Eden Gardens Test. Put to bat, the Indian openers Shikhar Dhawan and KL Rahul (a few eyebrows were raised at Murali Vijay s exclusion) were welcomed with rain before a ball was bowled. When play finally resumed, Rahul was unable to build up on his record of consecutive Test fifties. He fished at the first ball of the match that moved away late; Niroshan Dickwella took the edge. Cheteshwar Pujara walked out even before the spectators had settled down properly.

Dinesh Chandimal supported Lakmal with four slips and two gullies, and Lakmal bowled a steady line outside off. Shikhar Dhawan, who recently smashed two centuries against Sri Lanka, then thwacked a short-pitched ball from Lahiru Gamage to the point boundary. Unfortunately, he soon played on to Lakmal for 8, attempting an ill-advised drive on a pitch where the ball was darting around.

Pujara took 22 balls to get off the mark. Gamage bowled with pace and bounce, and beat Pujara twice in three deliveries. Pujara did get him away for four, but was not in complete control of the shot. However, he came back strongly with another four, this one firmly driven.

India survived a scare off the last ball before the stoppage: Virat Kohli, attempting to flick a pitched up delivery, played a half-hearted shot that fell short of mid-wicket.

Lakmal tested the others too before the light deteriorated and rain resumed.

Earlier, persistent rains and wet outfield washed out the first session. India added three pacers and two spinners, dropping Vijay in the process. Sri Lanka, on the other hand, are fielding six batsmen, four bowlers and a fast-bowling all-rounder to their starting line-up. 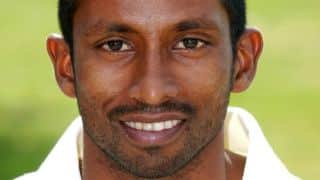 Russel Arnold: Sri Lanka need to try and perform to their potential against India