Angelo Mathews and Lahiru Thirimanne came to the rescue, scoring respective half-centuries to bring the visitors back in the game. At stumps, Sri Lanka trail by 7 runs.

After a commendable performance with the ball, Sri Lanka put up a decent show with the bat as they put up 165 for 4 at stumps of Day Three of the first Test against India. After bundling India for 172 in the first session, Sri Lanka lost two early wickets towards the start of their innings. Angelo Mathews and Lahiru Thirimanne came to the rescue, scoring respective half-centuries to bring the visitors back in the game. At stumps, Sri Lanka trail by 7 runs.

Sri Lanka found a way through Cheteshwar Pujara’s defense early on Day Three. Pujara carried his bat on Friday and completed his half-century on Saturday, but his stay was cut short post that. Lahiru Gamage got him bowled for 52.

Wriddhiman Saha and Ravindra Jadeja put up a brief partnership but could not build big on it. Before they could take the partnership past fifty runs, as Dilruwan Perera removed both of them in a single over. Mohammed Shami provided some last-moment fireworks and India’s innings came to an end with 172 runs on the board.

Bhuvneshwar Kumar brought India back into contention, removing the Sri Lankan openers early. But Mathews and Thirimanne revived their side, taking Sri Laka to 113 for 2 at the end of second session. Coming back from tea, both batsmen completed their respective half-centuries. Umesh Yadav and Mohammed Shami, who looked off colour and confused regarding line and length, found their mojo. Umesh bowled beautifully to break the dangerous partnership, getting both batsmen out. He kept it short for Thirimanne, who edged it to Virat Kohli at slip. In his next over, he pitched at good length, alluring Mathews to play on the up to cover, where KL Rahul took a clean catch.

Umesh produced another chance as a bouncer narrowly missed Niroshan Dickwella’s bat, and hit the batsman on the shoulder. The on-field umpire declared it as out. Dickwella promptly reviewed the decision which was then reversed by the third umpire.

At stumps, Dickwella (14*) remained unbeaten with Dinesh Chandimal (13*). Bhuvneshwar and Umesh were the only two successful bowlers for India with a couple of wickets each. India would be looking forward to the fitness of Mohammed Shami, who left the field early on Saturday with a discomforting hamstring. 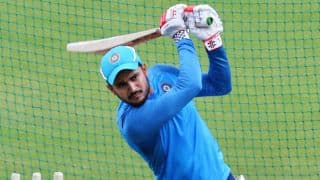