India vs Sri Lanka 2014, 2nd ODI at Ahmedabad: Motera One-dayer could be last before renovation

India vs Sri Lanka 2014, 2nd ODI at Ahmedabad: Motera One-dayer could be last before renovation

Gujarat Cricket Association could possibly renovate parts of the stadium after the match.

The second One-Day International, held at the Sardar Patel Gujarat Stadium in Motera here on Thursday between India and Sri Lanka, could be the last international game at this venue for some time as the arena is set to undergo renovation soon.

Gujarat Cricket Association (GCA) president Amit Shah is scheduled to announce the details of the refurbishment of the stadium, constructed in 1983 in time to host the Test match against the West Indies, on November 15 at the GCA’s Annual General Meeting, it was learned.

“The east and west stands are unlikely to be touched but there are plans to refurbish the northern and southern parts of the stadium. The time frame would have to be decided once the company to do the job is identified,” GCA sources said today.

“This stadium has become old and needs to be spruced up as per the requirements of the International Cricket Council (ICC).

The local and Board of Control for Cricket in India (BCCI) -run domestic matches can be held when the renovation is on, but international cricket has to wait till the work, as and when the decision is taken, is completed,” the sources added.

The southern stand houses the teams’ dressing rooms and pavilion while the northern end has the media box and TV commentators’ box, perched right on top above the stands for the spectators. 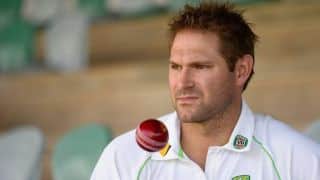