India scored 16 runs off the first over of the batting powerplay.

Rohit Sharma scored his fifth ODI century on his comeback for India against Sri Lanka in the fourth One-Day International (ODI) at Eden Gardens on Thursday. In partnership with Virat Kohli, Rohit put on over a hundred in quick time.

Earlier, Ambati Rayudu was cleaned up by Shaminda Eranga soon after Ajinkya Rahane was dismissed after a blazing start. Opening with Rohit Sharma, Rahane struck 17 runs off the first six balls he faced. Angelo Mathews got Rahane out LBW for a well-made 28 off 24 balls. Rohit Sharma was dropped in the fifth over by Thisara Perera.

Earlier, Karn Sharma, the right-arm leg-spinner, made his debut. Apart from him, Stuart Binny, Robin Uthappa, and Rohit Sharma came back into the Indian side at the cost of Wriddhiman Saha, Ishant Sharma, Shikhar Dhawan, and Ravichandran Ashwin. For Sri Lanka, Ajantha Mendis, Lahiru Thirimanne, Dinesh Chandimal, and Shaminda Eranga made comebacks to the side. 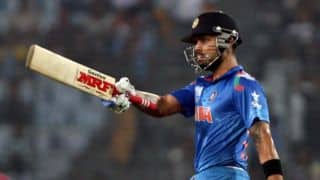