The Indians will square off against the islanders in the fourth ODI on Thursday.

An unassailable lead has been achieved against Sri Lanka but Indian skipper Virat Kohli today said India would not let the intensity slip in the remaining two One-Day Internationals (ODI) of the five-match series. Having already pocketed the series with a 3-0 rout, Kohli said they would continue to be ruthless in order to make it a habit ahead of the ICC Cricket World Cup 2015 next year. The Indians will square off against the islanders in the fourth ODI on Thursday.

“Especially knowing that the World Cup is around, we want to create good habits, can’t afford to be complacent at any point of time. It’s going to be the same kind of effort and intensity from everyone on the field. That’s something we are looking to create as a culture for the team going into big tournaments coming in future. It’s not difficult to motivate anyone. Our motive at the beginning was to be ruthless and try to win every game. We are just working towards that,” Kohli said in the pre-match press conference.

With regular skipper Mahendra Singh Dhoni yet to recover from a hairline crack in his thumb, Kohli has also been named skipper for the first Test in Australia beginning December 4 and the youngster said he already has some plans up his sleeve. Terming it a massive moment, Kohli said: “I’m really excited to lead in Australia that too in my first Test… I’ve some plans in mind. The focus would be to win the Test and not just focus on individual goals.

“Someone scoring 30 good runs in the end might be decisive. So there’s no criteria for a batsman to score five hundreds or six hundreds or more. The target would be how to win the Test matches, how to play session by session, how to target each bowler, that’s something I would look to bring into play as a captain,” Kohli said.

Reiterating his views on creating a perfect team atmosphere, the stand-in skipper said he would like to make the core group happy and comfortable “It’s all about building on to that every game you play. Like you get better with practising with batting a particular shot, why not create a winning habit and win from difficult situations something we have lacked in the past. It’s about doing it over and over again.”

“The only area we are concentrating on is getting the combination right and sticking to our strengths. In a format like ODI cricket it’s very important to stay focussed all the time. At the end of the innings, we’re looking to get teams out rather than saving runs, these are the areas we’re focussing on. Right now we’re winning but there would be times when results would not come our way. It’s important the core group feels comfortable even if we win or lose,” Kohli further said. 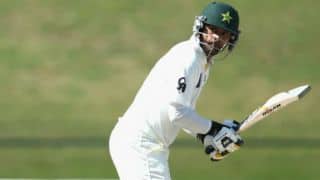