Sri Lanka agreed to play five ODIs as the stop gap team when the West Indies pulled out of the Indian tour.

“Some say we were attracted to the 6-7 million dollars that we will be making. It was not the reason. It was a decision by the SLC and the selection committee. They wanted to give fringe players more opportunity,” Aluthgamage told reporters.

Aluthgamage said the India tour was looked at as part of Sri Lanka’s preparations for the world cup.

Asked to comment on the wisdom of the decision after three straight losses in the five match series, Aluthgamage said,”Although we have lost all 3 matches so far, we might beat India in the World Cup.”

The Lankan sports minister said playing India remains the most profitable venture for the SLC. “Playing India is where the money is. But money was not the only consideration,” he defended.

Sri Lanka agreed to play five ODIs as the stop gap team when the West Indies pulled out of the Indian tour.

The decision drew fire from seniors who claimed that the hurriedly undertaken tour had upset Sri Lanka’s fitness programme aimed at conditioning the players towards the World Cup. 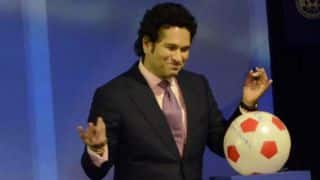