India vs Sri Lanka 2014: Rohit Sharma admits he was nervous during his comeback against Sri Lankans in war

Sharma's mammoth innings included 18 fours and a six of 11 balls.

Indian opener, Rohit Sharma on Thursday admitted that he was nervous pior to the warm-up match against Sri Lankans at the Brabourne Stadium leading to his comeback. Although, there was no sign of any nervousness by the opener once he took the field and slammed a blistering 142 that helped India-A put up a mammoth total of 382. It marked his return form an injury and a finger surgery after being out of action for nearly two-months.

Sharma played a brilliant knock against an upright bowling-attack from Sri Lanka. He said that before going on to the crease, his intention was to stay as long as he can and get accustomed to the conditions and get back his fitness before the ODI series against Sri Lanka set to get underway from Saturaday, Novemebr 2.

Sharma added, “It’s not like I wanted to prove anything. I started off slow but I knew that I will take some time to get back into the groove. It’s not easy to bat after such a long time. I was ready to struggle. The way Unmukt was batting allowed me to take my time. I have played lots of games in CCI and I know that if we managed to get past the first eight overs, then the track helps batters.”

Sharma’s mammoth innings included 18 fours and a six of 11 balls. Although most of his runs came in the later stage of his innings as he started to play in a free-flowing manner including a few cuts and beautiful drives.

Being his first competetive cricket match after his comeback from the injury and despite a brilliant knock in the warm-up tei against the Sri Lankans, he has been advised for a rest of 10 more days and is scheduled to take the field against Sri Lanka in the fourth ODI.

However, the squad selected for Mumbai to participate in the Vijay hazare trophy does not include Sharma’s name which clearly suggests that he has seriously been advised to take the rest. “Sandeep Patil is keen that Sharma plays the fourth and fifth ODI so he wanted him to take rest,” said an MCA selector. Although Sharma is planning to play a few local games befor taking the field against Sri Lanka in the fourth ODI in order to gain more exposure and match fitness.

“I might play a few local games. I always believe that no matter how many runs you’ve scored in your career doesn’t matter. One should always go in with match practice; it is very important. My motto is to go back into the Indian team but at the same time I want to go there with few more games behind me,” he added. 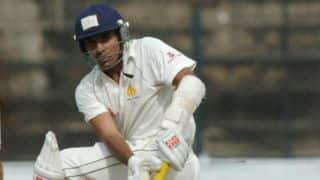