Sanjay Manjrekar's made the comments after Rahane scored a century in the 2nd Test at No. 3.

Mumbai: Former India batsman Sanjay Manjrekar believes that in-form batsman Ajinkya Rahane should bat at No. 4 or 5 in Tests as the No.3 spot is not an ideal place for him on a long term basis. The right-handed batsman played an impressive knock of 126 runs in the just concluded second Test against Sri Lanka. India beat hosts Sri Lanka by 278 runs in the second Test to draw level the three match series 1-1. “Rahane might be similar to Rahul [Dravid] in approach, temperamentally and nature wise but their batting style is different. So I think Rahane will not be an ideal No.3 batsman, keeping in mind the long term plans. I would rather bat him at No.4 or 5,” Manjrekar was quoted as saying by ESPNcricinfo on Wednesday. READ: Ajinkya Rahane has silenced the No.3 debate, says Anil Kumble

Batsman KL Rahul kept wickets in the second Test on the final day and Manjrekar said India should go with a specialised keeper in the third Test and not depend on Rahul.

“I don’t think India should let KL Rahul keep wickets in the third Test. It is too risky to try in a Test which goes on for five days. Rahul hasn’t kept wickets for a long time. In the second Test he took a good catch and dropped one.

Off-spinner Ravichandran Ashwin has taken 17 wickets at an average of 16.35 in the series so far, claiming five-wicket hauls in each of the two Tests. Manjrekar praised his efforts.

“The way Ashwin is bowling right now will give him wickets in all conditions. I hope an overseas tour comes in very soon so that he can carry his form there. He looks perfectly ok in this style of bowling. At his point of time he looks like a world class off-spinner who can take wickets all over the world,” the 50-year-old said.

India and Sri Lanka are tied at 1-1 in the three-match Test series with the third match beginning in Colombo on Friday.

Speaking about India’s chances in the third and final Test, Manjrekar said, “With Kumar Sangakkara retired, team will be weaker. Sanga may not have scored much runs in the first two matches but the team will surely miss him on the field. This is the best chance for India to beat Lanka, as the hosts are a young team and after Sanga’s departure they look a bit weak.” READ: Kumar Sangakkara bids emotional farewell to international cricket IPL Governing Council to meet in Kolkata on August 27 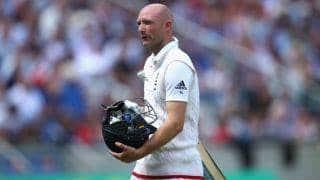