Barring this one aspect, the five wise men on the selection panel would have very little to fret.

New Delhi: The third specialist spinner’s slot will be the subject of much deliberation when the national selection committee, headed by Sandeep Patil, meets here on Thursday to announce the squad for the three-Test away series against Sri Lanka starting August 12. BCCI ties up with British Council to train Indian Umpires

Barring this one aspect, the five wise men on the selection panel would have very little to fret on while picking the squad for the longer format where at least 13 players will automatically select themselves.

Apart from third spinner’s position, it will also be interesting to find out whether it will be a 15 or 16-member squad for the three-match series. India A vs Australia A: KL Rahul’s 96 leads side to 226

The six specialist batsmen who are automatic choices are openers Murali Vijay and Shikhar Dhawan, skipper Virat Kohli, Ajinkya Rahane, Rohit Sharma and A team captain Cheteshwar Pujara. Young KL Rahul, who missed out against Bangladesh due to dengue, is likely to come back as the seventh batsman.

Wriddhiman Saha is another automatic selection as first-choice wicketkeeper while an additional 16th member might make provision for Naman Ojha or Sanju Samson as the second wicketkeeper. VVS Laxman: No one is bigger than cricket

The three pacers, who are likely to make the cut are Umesh Yadav, Ishant Sharma and Bhuvneshwar Kumar. Pacer Varun Aaron is also a certainty if he recovers from his bout of influenza.

While the two off-spinners Ravichandran Ashwin and Harbhajan Singh are sure to retain their places, it remains to be seen whether the selection committee opts for a left-arm spinner in Akshar Patel or a veteran leg-spinner in Amit Mishra. VVS Laxman joins CricketCountry.com as Chief Cricket Mentor

With Karn Sharma sustaining a fracture before Zimbabwe series, it brings 32-year-old Haryana leggie Mishra into the picture.

Mishra has 43 wickets from 13 Test matches but he has last donned whites for India way back in 2011 against England at the Oval, in which he excelled as a batsman with scores of 43 and 84 while going wicketless for 170 runs in 38 overs. India tour of Sri Lanka 2015: BCCI to announce squad on Thursday BCCI ties up with British Council to train Indian Umpires 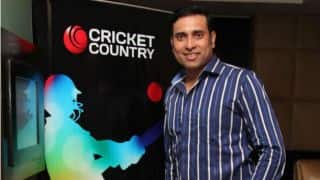