Tharindu Kaushal took 5 for 134 as Sri Lanka bowled India out for 375, conceding a 192-run lead as Shikhar Dhawan (134) and Virat Kohli (103) put on 227 for the third wicket. Wriddhiman Saha (60) scored his maiden Test half-century, but India once again suffered a collapse to go from 255 for 2 to 302 for 6 before Saha found some support in Harbhajan Singh, Amit Mishra, and Ishant Sharma. Kaushal managed to dismiss Kohli, Ajinkya Rahane, Harbhajan Singh, and Amit Mishra, but was hit all over the park. Nuwan Pradeep took three wickets as well, while Angelo Mathews and Dhammika Prasad took one each. However, Saha ensured that the clump of wickets India lost did not damage them too much with a resolute innings that saw him make 60 off 120 balls. He took his chances on occasion, while Ishant offered a dead bat at anything remotely close to his stumps. On the whole, it was a day on which India continued to dominate, as Kaushal went for over four runs per over despite taking the most wickets. Live Updates: India vs Sri Lanka, 1st Test at Galle, Day 3

Live Streaming is the new fad that is slowly engulfing the world of sport and cricket has been no laggard either. Almost all cricket tournaments today are shown live on the internet and the response from people has been roaring. The days of having only the next days newspaper for information on the match, in absence of television are now history. However, one must exercise caution when going to websites for online streaming. There are a lot of fake wolves out in the internet ready to mislead you into malignant and harmful websites in the name of live streaming. Make sure of the authenticity of the website before you go ahead or you could have a computer infected with viruses. VIDEO: Saha drops easy catch of Dinesh Chandimal off Ishant Sharma in India vs Sri Lanka 1st Test 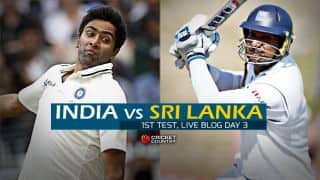