India will head into Day Four of the First Test against Sri Lanka with truckloads of confidence given that they need only 153 more runs to make this game theirs and have nine wickets in hand. Sri Lanka have been tame in the game for most part and the scoreline indicates that. Only a brilliant knock from Dinesh Chandimal on Day Three gave their effort some credibility. Chandimal scored an unbeaten 162 that gave Sri Lanka an opportunity to set India a slightly threatening target of 175.

Ravichandran Ashwin was again phenomenal for India and showed what a force he is on sub continent pitches even outside India. After one wicket on Day Two, that of Dimuth Karunanratne, he struck thrice on Day Three to dismiss a well set Kumar Sangakkara, Lahiru Thirimanne and finally got the last wicket of Nuwan Pradeep.

The game is in India’s favour at this stage but the ball will start to turn as it gets softer and the spinners Tharindu Kaushal and Rangana Herath will be hoping to make a match-changing impact. Shikhar Dhawan is still at the crease and going by his first innings performance, he has a bigger contribution to make in this chase. The only casualty for India on Day Three was KL Rahul who failed for the second time in the game, getting out for five runs lbw to Herath. 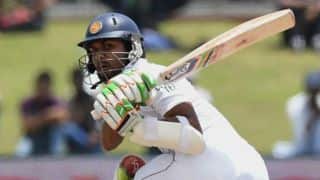 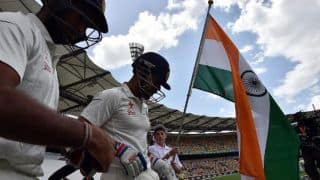