Catch the live streaming of the second Test between India and Sri Lanka at P Sara Oval, Colombo here.

The second of the three-Test series between India and Sri Lanka at P Sara Oval hangs in balance as Sri Lanka finished Day 2 at 140 for the loss of three wickets with Angelo Mathews and Lahiru Thirimanne batting for them. India were bowled out for a score of 393, they added 74 runs on Day Three before losing all the remaining four wickets. Wriddhiman Saha scored his second Test fifty to ensure India got closer to the 400-run mark. With the ball, India struck early removing Dimuth Karunaratane. The bowling from India was disciplined and they kept the pressure on the hosts. Live cricket score India vs Sri Lanka 2015, 2nd Test at Colombo, Day 3

Kumar Sangakkara playing his final Test was out for 32 in his penultimate innings in Test cricket, getting caught by Ajinkya Rahane at first slip of the bowling of Ravichandran Ashwin. Kaushal Silva fought hard for his fifty but fell closer to the stumps which ensured the game hung in balance at close of play. The trail is still 253 runs for the hosts and they will want to wipe out as much possible while India will look for wickets early in the day. 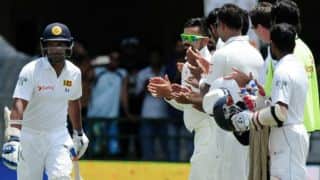