Catch the live cricket score from the second Test between India and Sri Lanka from Colombo here.

Kumar Sangakkara gets a chance to bow out in style by leading Sri Lanka to a series-cliching victory in the second Test against India starting in Colombo on Thursday. The prolific left-hander, the highest run-getter among those still playing at the highest level, will bid adieu to international cricket after the match, ending a glorious 15-year career. With Sri Lanka leading the three-match series after conjuring a brilliant come-from-behind win in the first Test in Galle by 63 runs, the stage is set at the P Sara Oval for a Sangakkara special. Live cricket score India vs Sri Lanka 2015, 2nd Test at Colombo, Day 1

The 37-year-old will be desperate to end an unusually barren streak at the venue where he has fallen for zero in each of his last three Tests, including a first-ball duck against Pakistan in June. Sangakkara scored five and 40 against the Indians in Galle, where Sri Lanka snatched a remarkable victory after seemingly heading for a crushing loss. Live cricket updates: India vs Sri Lanka 2015, 2nd Test at Colombo, Day 1 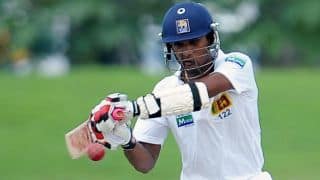