Catch the live cricket score from the second Test between India and Sri Lanka from Colombo here.

KL Rahul hit a century as India overcame early shocks to post 319-6 on the opening day of the second Test against Sri Lanka in Colombo on Thursday. Rahul scored 108, his second Test century in four Tests, and shared a third-wicket stand of 164 with skipper Virat Kohli (78) after the tourists had slumped to 12-2 by the fifth over of the match. Both batsmen fell on either side of the tea break, but Rohit Sharma boosted the total with a typically aggressive 79 that contained three sixes and five boundaries. Sharma was leg-before to Sri Lankan captain Angelo Mathews off what became the last ball of the day, leaving Wriddhiman Saha unbeaten on 19. Live cricket score India vs Sri Lanka 2015, 2nd Test at Colombo, Day 2

The 23-year-old Rahul, who hit a century against Australia in Sydney in only his second Test earlier this year, made amends for scores of seven and five in the first Test with delightful strokeplay. Dropped at gully by Jehan Mubarak off Dushmantha Chameera when he was on 11, Rahul hit 13 boundaries and a six before a loose shot cost him his wicket after tea. Rahul top-edged a hook off Chameera and the ball ballooned in the air before landing safely in the hands of wicket-keeper Dinesh Chandimal. Live cricket updates: India vs Sri Lanka 2015, 2nd Test at Colombo, Day 2

Some 6,000 home fans at the P. Sara Oval applauded warmly when Sri Lanka’s batting great Kumar Sangakkara was welcomed on to the field in his last Test with a guard of honour by young children holding raised bats. 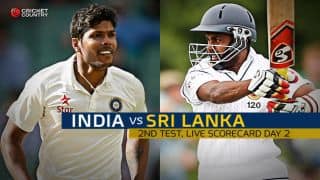 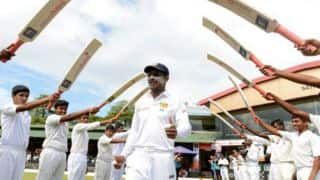