Cheteshwar Pujara celebrated his return to India’s playing XI with an unbeaten century after pacer Dhammika Prasad’s four-wicket burst pegged India back, reducing them to 180 for 7 in the decisive third and final Test at the Sinhalese Sports Club (SSC) ground in Colombo on Saturday. According to AFP, Pujara said, “This is definitely one of the toughest wickets I have played on. It’s a challenge to bat on it because you have to keep defending to survive and wait for the loose ball. I tried to keep things simple and play my natural game. It was important to play the ball from close to the body because a few guys got out playing it away from the body.” Pujara said encouraging words from Indian batting great Rahul Dravid motivated him when he was out of the playing XI. “Rahul told me there was nothing wrong with my technique and that I was batting well,” said Pujara. “He told me to stay calm and a big one could some soon.” Live cricket scorecard: India vs Sri Lanka, 3rd Test at Colombo (SSC)

Meanwhile, Sri Lankan pace bowler Dhammika Prasad said, “I am enjoying bowling on it, but you have to make sure you don’t get carried away. We had them seven down for 180, but then came the century stand between Pujara and Mishra,” he said. “That put us back a little, but I think we can get back into a good position if we take the remaining wickets early.” The series is locked at 1-1 after Sri Lanka won the opening Test in Galle by 63 runs and India drew level with a 278-run win in the second match at the P. Sara Oval in Colombo last Monday. Live cricket updates: India vs Sri Lanka, 3rd Test at Colombo (SSC), Day 3 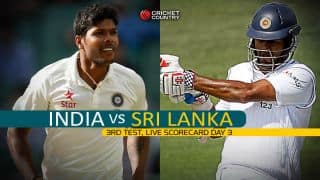