India vs Sri Lanka 2017-18, 1st Test at Eden Gardens: Hosts happy to play on challenging wickets like this

Indian assistant coach Sanjay Bangar has said that the hosts are so far happy to play on a surface like this.

Despite having gone off to a shaky start in the opening day of the opening Test against visitors Sri Lanka at the historic Eden Gardens in Kolkata on Thursday, Indian assistant coach Sanjay Bangar has said that the hosts are so far happy to play on a surface like this. He backed his side whilst also adding that it is in these kind of tracks the side loves playing as it provides challenges. Bangar added that it was the same track on which India beat New Zealand in 2017, and feels despite the strong challenge the track provides, India would thrive on it and try hard to come out on top. FULL CRICKET SCORECARD: India vs Sri Lanka 2017-18, 1st Test at Eden Gardens

“We are happy to play on wickets like this. A team doesn’t really want to play on easy conditions. We challenge ourselves and most players are open to such challenges. We want to continue improving as a team. It was a similar wicket last year, after it was relaid. We played the Test really well and applied ourselves. We are ready for the challenge. The conditions were pretty tough for batting and what didn’t really help us was we did not get an extended passage for play wherein you had 15-20 overs bowled at a batsman in a particular fashion. It didn’t allow our batsmen to get into a rhythm,” said Bangar during the post-play press conference.

On of India could bounce back

“We have got all bases covered as the game goes into fourth and fifth day. There would be dents in the wicket because of the dampness. There will be variable bounce which may come into play. Both spinners are really vital to us. We have got swing and seam and the pace that is required.” FULL CRICKET UPDATES: India vs Sri Lanka 2017-18, 1st Test at Eden Gardens, Day 1

On the use of floodlights

“It was similar to a day-night Test. It didn’t seem to be a day Test. At times under such circumstances, playing with a red ball becomes pretty tough. It’s more difficult to pick the red balls.”

“The amount of times you are going to get beaten plays on your mind. The best approach is to forget the previous ball and accept that you got beaten on a number of occasions. You may not really play elegantly but you will have to grind it out as those are equally important runs.” Suranga Lakmal enters record books at Eden Gardens

On the top order collapse

“You can’t really fault them for shot selections. All credit to Lakmal who put the ball in right place and let the wicket did the rest. He used the conditions that suited him. He’s a strokeplayer, he backs himself to play shots and whenever the shots come off it really looks great. At times they can change the course of the match in a matter of 15 overs. You want a player like Shikhar to play in his own fashion. Every batsman has individual style of play, we don’t want to curtail their style of play.”

“The quality of all-rounders gives a lot of depth in lower order batting and also bowling option to get 20 wickets in a Test. It has worked well in two and a half seasons and we have won mainly because of our composition.” Afghanistan to play ODI and T20I series against Zimbabwe in UAE 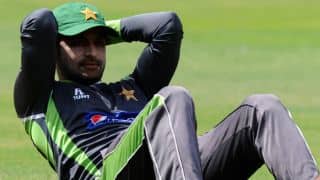