India were once again in the driver's seat against Sri Lanka in the second innings on Day Four of second Test at Delhi.

India were once again in the driver’s seat after they managed to scalp three wickets and put Sri Lanka under pressure in the second innings on Day Four of the second and final Test at the Feroz Shah Kotla Stadium in Delhi on Tuesday. Having set a target of 410 in the second innings, the Sri Lankans quickly lost three wickets. They are still 379 runs short of the target with just seven wickets in hand, as they move into Day Five on Wednesday. Sri Lankan coach Nic Pothas said that it was indeed frustrating to lose the three wickets at the end of the day. FULL CRICKET SCORECARD: India vs Sri Lanka 2017-18, 3rd Test at Delhi

“It is frustrating to be in this position. Obviously it is not ideal to lose three wickets. We are in India playing against a very very good cricket team. We did pretty well in the morning to extend our innings and bowled well at the beginning [of India’s second innings]. Too much of a coincidence. We lost a wicket with the seam. It was dark and against the spin, we lost two wickets and we are off. So it is frustrating,” said Pothas during the post-day press conference.

On the pollution issue

“I thought the guys did fantastically well. Shami was struggling today. We made a pact with the team that we are not going to discuss about it. It is what it is. We can’t help. But let’s just get on with the game. Some people adapt to situations differently than others. Physiologically everyone is different from each other.” 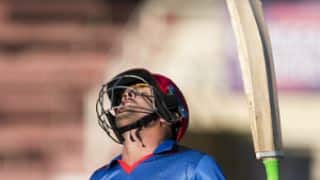