Virat Kohli had made it clear that the Sri Lanka series is their warm-up for what lies in South Africa and for the second Test, the caravan moves to Nagpur.

Captain Virat Kohli had made it clear that the Sri Lanka series is their warm-up for what lies in South Africa and for the second Test, the caravan moves to Nagpur. Thanks to the untimely rain, Kolkata was a demo of any of the naturally seam-friendly pitches and the track at Nagpur will continue to assist pacers. However, things may not be as friendly for seamers as it was in Kolkata. FULL CRICKET SCORECARD: India vs Sri Lanka 2017-18, 2nd Test at Nagpur

India will be playing without Shikhar Dhawan and Bhuvneshwar Kumar, both of whom have opted out of the match citing personal reasons. As back-ups, India have the two Vijays from Tamil Nadu has replacement. Murali Vijay will walk straight into the side while Vijay Shankar might get his maiden India cap on Friday.

Vijay, who waited in bench at Eden Gardens, will be eager to play his first Test after his injury time off the field. His latest First-Class form shows good promise.

Though Shankar has been quite consistent with bat, his bowling lacks consistency. He has enjoyed good spells here and there but for wickets, Kohli will have to majorly depend upon Mohammed Shami and Umesh Yadav. Once pitch starts deteriorating Ravindra Jadeja and Ravichandran Ashwin can take care of the rest. Either of them can also miss out if it is all green at Nagpur, and there is a chance that Ishant Sharma plays. If only India look to play six specialist batsmen otherwise it does not leave any room for Rohit Sharma to be picked.

After the failed experiment with Wriddhiman Saha s batting position, Virat Kohli would like to send him ahead of Jadeja and Ashwin. Also, Ajinkya Rahane will have to up his game.

Suranga Lakmal stole the show in Kolkata while Lahiru Gamage had put up a comparatively bleak show. However, blaming it on the bowler s lack of international experience, Dinesh Chandimal is ready to give him more chances. Sri Lanka have another pacer in Vishwa Fernando who can be brought in in place of Dasun Shanaka.

Though both teams struggled in Kolkata, Sri Lanka s batting has been below average, if the two half-centuries be taken away. That is one area the team has been struggling for a long time now. They have also been terrible in the second innings. But they barely have potential options to replace what they have as their batting line-up and might proceed with the same.

However, another option will be to drop Sadera Samarawickrama for the match, pushing the experienced ones up and bringing in yet another all-rounder in form of Dhananjaya de Silva.

Virat Kohli on Shankar’s call-up: “We wanted to look at another all-rounder keeping in mind that it’s a very important aspect of the team going forward. Obviously, Hardik is in our scheme of things as our first all-rounder. But we need to, obviously, find out more people who have that capability and whom we can groom and make as back-ups for the all-rounder’s slot, which is very, very crucial for us when we travel abroad.

“That is the whole idea of bringing him in and keeping him in the set-up and making him familiar with what’s going on here and making him understand what he needs to work on and look at his game as well. He is a pretty balanced cricketer, he is very composed. He is handy with the ball – he can easily give you 10-12 overs a day – and he is very solid with the bat. I just saw him at the nets. Big moment for him. He has earned it, as I said.”

Dinesh Chandimal’s support Gamage: “Calcutta was his second game [in Test cricket]. His first game was in Dubai and he did well against Pakistan. You can have a bad day and you can have a bad game. He is a really good player. He has a lot of experience, having played quite a bit of domestic cricket. I am sure he will be a good asset, especially when bowling on a wicket like this. We will make a call on the side tomorrow morning.” 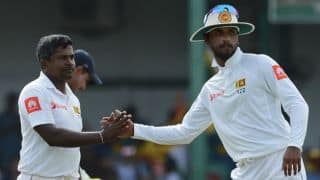 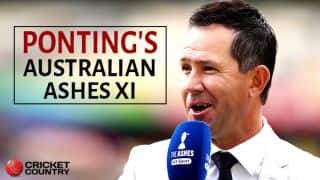