Current Sri Lanka outfit is struggling to cope with continuous string of failures.

India have so far been superior of the two sides across the 3-Tests and first One-Day International (ODI) on their Sri Lanka tour. Sri Lanka, on the other hand, have been a pale shadow of their former self that were once unbeatable at home regardless of the opposition. This series has constantly seen a downfall of the hosts on and off the field. With the second ODI just hours away, Sri Lankan management have a lot to ponder upon mostly picking the strong suited playing XI. Coach Nic Pothas has already been in the thick of things regarding team selection and fitness of their national players.

Current Sri Lanka outfit is struggling to cope with the failure factor, string of defeats have depleted the sides confidence that continuously is been hammered to pulp, a sentiment shared by former great Mahela Jayawardene. I feel the team s confidence is low. The fear of failure factor has come out. They don t look confident, they don t look hungry enough in the middle. They need to address that and find solutions very quickly,” Mahela said.

With change of guards at a regular basis, there is no proper directive for the players to follow. From Angelo Mathews, Dinesh Chandimal, and now Upul Tharanga, players have struggled to find focus in regards to their place in the side and individual goal-setting. Chandimal s exclusion from the ODI outfit has also created a rift between selectors and management. Pothas has often indicated that hand of outsiders in Sri Lankan cricket that has hampered their growth and have resulted in the sides abysmal show.

Even the nation has somewhat given up on Sri Lankan side, after they barraged the team bus and shouted slogans at Dambulla after loss. More than anything the remaining four ODIs are a matter of national unity and Sri Lanka cricket s stature. The batting in the first ODI was decent with almost every player getting starts. It was only lack of belief and time in the middle that saw most players panic against a tight Indian attack.

Their main cause of concern is their death over batting with Thisara Perera, Chamara Kapugedera and Wanidu Hasaraga hardly displaying any form. Hasranga might be dropped for the First-Class experienced Malinda Pushpakumara. Milinda Siriwardene could also get a look in replacing Kapugedera. Bowling remains their weakest point with no outline whatsoever. Pothas will want to give the same batch another outing before making any hasty decisions.

India, on the other hand are unlikely to even tinker with the thought of not playing the same eleven. Most of the batsmen did not even get a change to have some game time in the middle. India s bowling was tight but still could improve on their show. The likes of Shikhar Dhawan, Rohit Sharma and Virat Kohli will once again look to accumulate runs like slicing a hot-knife through butter.

It is unlikely that India will take the experimental route after winning first ODI.

Numbers game: Sri Lanka and India have clashed in one ODI at Pallekele International Cricket Stadium, Kandy with the visitors’ coming out as winners.

Virat Kohli is 45 runs away from surpassing Faf du Plessis (814) record as highest run-getter in ODIs in 2017. 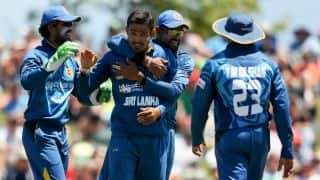