Having already played five sessions, India look in no mood to declare yet.

With the batting list stretching until the No. 9 Ravindra Jadeja, a mammoth score was on the cards. He scored an unbeaten 37 before tea, after India lost Ravichandran Ashwin and Hardik Pandya. To inflict more pain on the wounded Sri Lankans, Wriddhiman Saha scored his fifth half-century. He came when India were 413 for 5, and now has taken them to the brink of consecutive first-innings total of 600, as India went into tea at 553 for 7.

Ravichandran Ashwin completed 2,000 Test runs with a six downtown. With this achievement, he added another feather to his cap. He became fourth-quickest to attain career-double of 200 wickets and 2,000 runs. At this rate and given Harbhajan Singh is no longer picked, he may as well become only the second Indian to 300 wickets and 3,000 runs.

Off the very next ball, Rangana rushed one past his defence and uprooted the off-stump. Hardik Pandya played a run-a-ball 20 before he tried to clear Malinda Pushpakumara over long-off but found Angelo Mathews. That took Malinda Pushpakumara’s tally of First-Class wickets to 600.

The last time Sri Lanka bowled over 150 overs was in 2014, against South Africa, at Galle. Having already played five sessions, India look in no mood to declare yet. Partnerships have been the underlining factors of this Indian innings, as the Sri Lankans could never take wickets in quick successions.

With Jadeja and Saha having already added 57 runs, things look bleaker for Sri Lanka from hereon. 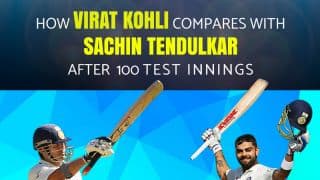 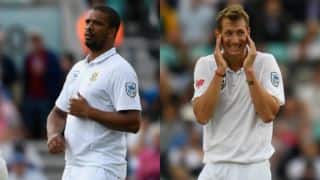