The ODI will be played at Rajiv Gandhi International Stadium.

Telangana Chief Minister K Chandrasekhar Rao would be the chief guest at the one-day international cricket match to be played here between India and Sri Lanka on November 9.

The members of both teams would be introduced to Rao, a release from Chief Minister’s Office said here today. The ODI, to be played at the Rajiv Gandhi International Stadium at Uppal, would be the 3rd tie in the ongoing five-match series between the Asian giants.

Dilshan, the oldest member of the team at 38, said that his team should put the disappointment of the first match behind and look to put the best foot forward. “I think we have in the past not done well at the start but have bounced back in the series. We have to forget what happened in the last match and play our brand of cricket. Anjali Tendulkar describes how she fell in love with Sachin Tendulkar 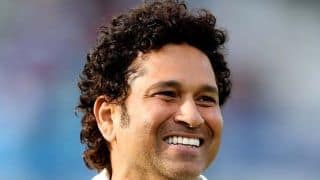