India beat Sri Lanka by 8 wickets at Visakhapatnam to win the 3-ODI series 2-1.

Upul Tharanga s onslaught: Despite an early setback, Upul Tharanga steadied Sri Lanka s ship. The former Sri Lanka skipper did not hold back his natural game and continued to make merry on a flat deck at Vizag. He tore apart Hardik Pandya’s pace-bowling, smacking him for 5 consecutive boundaries in an over.

Tharanga reached his 36th ODI fifty in 36 balls. He looked well set for a century but fell for 95.

Sadeera Samarawickrama s scratchy innings: Coming from a sturdy knock in Delhi, Sadeera had quite a difficult outing. He was seen struggling against Kuldeep Yadav and Yuzvendra Chahal. He tried reading the spinners off the pitch but failed on many occasions.

Sadeera got off the mark in ODIs with a mighty four, but found himself battling for fluent runs. He was out for 42 off Chahal.

MS Dhoni continues being MS Dhoni: Tharanga, having smacked 95 runs, was looking ominous t Vizag, but Dhoni had other plans. Having missed a quicker one from Kuldeep, Tharanga dragged his foot out of the crease for merely a second and found himself stumped.

It was the brilliance of Dhoni s reflexes that provided India the wicket.

Kuldeep-Chahal stifle Sri Lanka: Without any sizable contribution so far, India s spin duo of Yuzvendra Chahal and Kuldeep Yadav hogged limelight at Vizag. Kuldeep started the procession getting rid of Tharanga and Niroshan Dickwell. Niroshan, along with Akila Dananjaya, did not pick Kuldeep one bit.

As far as Chahal is concerned, it was his scalp of Angelo Mathews that caught everyone s attention. Chahal also dismissed Sadeera Samarawickrama and Thisara Perera. His dismissal of Mathews was reminiscence of James Vince s dismissal from the Perth Test.

Rohit Sharma’s flop show: Fresh from an unbeaten 208*, Rohit Sharma came out with all the confidence in the world. After thrashing Akila Dananjaya for a monstrous six, Rohit handed his wicket away by getting completely baffled by a googly. He fell for 7.

Shreyas Iyer‘s steals Dhawan’s thunder: Renowned as a T20 player, Iyer started cautiously at Vizag. He rose to the occasion and outshined his more accomplished partner Shikhar Dhawan in the middle.

Iyer exhibited a wide range of shots against spinners that impressed one and all. Scoring his second consecutive fifty in 44 balls, he threw his wicket away.

Shikhar Dhawan’s blitz ton: Dhawan, who was a mere spectator in the start of India’s innings, gained confidence as the match progressed. Anchoring the innings, Dhawan picked up pace once he was nearing hundred.

Dhawan ransacked Sri Lankan bowlers to all parts of the park during 12th ODI hundred. 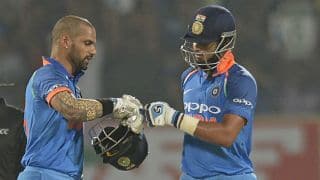 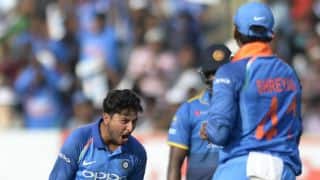