India won the 3 match ODI series against Sri Lanka in Visakhapatnam with 2-1.

India won the three-ODI series against Sri Lanka in Visakhapatnam by 2-1. India had faced an embarrassing defeat by 7 wickets in a low-scoring game at Dharamsala. In return team India came back stronger with a total of 392 in the second ODI as Rohit Sharma scored his third double-hundred. India levelled the series with a comprehensive win over the visitors.

We showed plenty of character

Terrific comeback after the first game in Dharamsala. We showed plenty of character. Even today at one point they were going at 6 an over and to pull the game back from there is magnificent. This has been the hallmark of the team. Whenever we were defeated, we have always come back strong, Sharma said in the post match presentation.

As a captain, my job becomes a lot more easier that way. Very proud of the boys. I think the first game was a bit testing as a captain, because we didn’t put enough runs on the board, and in the second game since we had lot of runs I had the luxury to try out a few things. It was a perfect game for me to settle in.

In today s game Sri Lanka were 135 for 1 till the 22nd over, but the bowlers did a good job in pulling things back and not allowing Sri Lanka to post a big total. Sri Lanka could only manage 215 before getting all out in the 45th over.

Today was a perfect game. When you have bowlers like that in your side, the job becomes very easy for the captain. You throw the ball and they get you wicket all the time. Whenever we were put into the tough situations, we responded well. We played as a team more than anything else. Everyone knew what they needed to do as an individual to win the series and they perfectly did that, he said.

Shreyas Iyer missed his century by 12 runs in the second ODI. He started well today coming to bat at one down; he scored his half century before Dhawan but got out on 65.

He showed a lot of intent

The batting of Shreyas Iyer was a big positive. He showed a lot of intent. The way he came out and batted was brilliant. We never felt from the outside that he’s played only a couple of games. We felt that he’s already been there for a long time. He batted fearlessly and got the result he wanted.

Washington Sundar, who had made his debut in the last game, missed out today due to fever. Kuldeep Yadav, a Chinaman bowler, replaced him. Both wrist spinners shared 6 wickets between them and restricted Sri Lanka from setting a huge total.

Of course, the spin twins. They haven’t bowled much together as bowlers, but whenever they have played, they bowled really well. They put us in the driver’s seat, the way they played during the New Zealand and Australia series was beautiful.

I hope, as a team, we can continue to do that. We have to respond well as a team. This team has shown that again and again, we just need to continue from where we left off.”

The T20Is against Sri Lanka end on December 24, and soon after, India will tour South Africa with Test series starting from January 5. India will later tour England and Australia.

We are going abroad now, the next one and half year will be challenging as a team and I’m sure we are ready for it. The youngsters bring a lot of energy, enthusiasm and talent to the group and it’s a perfect time to try them. They have done well in the shorter formats and I’m sure they are ready for all the upcoming challenge, he concluded. 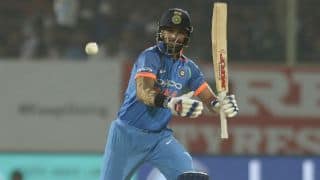