Dinesh Chandimal slammed his 10th hundred and second against India to keep Sri Lanka's stake alive in the third Test at Delhi.

Angelo Mathews defiance: Mathews continued his march on Day Three as Indian bowlers toiled hard. He continued to struggle in parts, but never for once lost his composure, moving on to record his 29th half-century. He looked comfortable driving the ball but struggled somewhat while pulling or hooking. He was dropped on 98 by Rohit Sharma in the slip cordon before reaching his eighth ton in 231 balls. He eventually fell on 111.

Dinesh Chandimal s grit: Chandimal, Sri Lanka s knight in shining armour this series, remained unfazed by all negative media bashing surrounding mask-gate. He came out with a positive mindset and went up against the likes of Ishant Sharma, Ravindra Jadeja and Mohammed Shami with ease, holding one end up in a mammoth stand with Mathews. He scored his third fifty of this series, in 145 balls, and went on to endure Delhi s pollution. His hard work paid off and the Sri Lankan captain scored his 10th ton; fourth against India. Chandimal remained not out on 147 heading into Day four of the Kotla Test.

Ravichandran Ashwin foxes Mathews: After toiling hard for 54 overs, India finally had reason to cheer about thanks to Ravichandran Ashwin. Looking for his first wicket, Ashwin bowled a straighter one that did not turn as much as he had expected to. Taken aback, he gave a faint edge to Wriddhiman Saha for nelson.

Wriddhiman flying Saha: It has been day of flying catches on the cricketing field today. After Nathan Lyon s scorcher against England to dismiss Moeen Ali, Wriddhiman Saha displayed his caped capabilities to all. Saha went on his knees and from their stretched all out to his right to pluck another classic catch in his list of many. 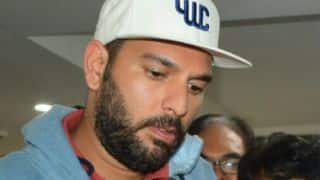 Yuvraj Singh: I see myself playing cricket till 2019