India drew the third Test with Sri Lanka, hence concluding the three-match series 1-0. This was only India's second draw with them under Virat Kohli's tenure.

India drew the third Test with Sri Lanka, hence concluding the three-match series 1-0. This was only India’s second draw with them under Virat Kohli‘s tenure. While the visitors were exposed in front of India’s skillful all-round performance, Indian cricketers piled on records, making the opportunity count. Here, the players have been rated on a scale of 0 to 10 based on their performance in the final Test.

Murali Vijay (8/10 – 155, 10): Vijay’s impressive comeback stint continues, as the batsman hit consecutive centuries. India lost Shikhar Dhawan and Cheteshwar Pujara early in the first innings and Vijay partnered with Kohli, scoring 155 and celebrating with a double-dab and a jig. He also bowled an over to give the specialist bowlers rest.

Cheteshwar Pujara (6/10 – 23, 49): Pujara made up for his 23 in the first innings, with a 49 in the following. Though he could not reach his half-century, his knock and partnership with Dhawan revived India after some early loss of wickets.

Ajinkya Rahane (2/10 – 1, 10): When others put up big knocks in the series, the one batsman who struggled was Rahane. Rahane’s form continued to the final match, as he scored 11 runs from the two innings.

Rohit Sharma (6.5/10 – 65, 50*): Rohit followed up his century at Nagpur with two very good fifties in the Delhi Test. In the second innings, he scored over a run-a-ball. Rohit gets half a point deducted for dropping a catch.

Ravichandran Ashwin (4.5/10 – 4 runs, 4 wickets): Ashwin bowled decently, taking 4 wickets in the Test. A lot of hopes were pinned on him but he was far from being the best. He did not get going with the bat as well.

Wriddhiman Saha (5/10 – 9*, wicketkeeping): Saha batted only in the first innings, and the innings was declared soon after. He kept wickets in the match, took some good catches but it was a rare game that saw him miss chances as well.

Ravindra Jadeja (6/10 – 5*, 5 wickets): Jadeja bagged five wickets from the match. He produced many chances and one was wasted due to no ball. He fielded well too.

Mohammed Shami (5.5/10 – 3 wickets): Though Shami bagged only 3 wickets from the match, his bowling remained impressive throughout. He was accurate and put batsmen under pressure.

Ishant Sharma (6/10 – 3 wickets): Ishant gave away a lot of runs towards the beginning of his spell but slowly got himself back on track, picking up 3 wickets from the match. He wasn’t fortunate enough as three catches were dropped of his bowling in the first innings. 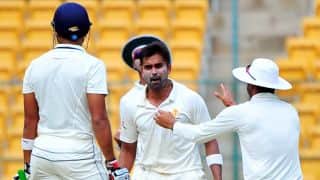