Virat Kohli has been churning out record after record in 2017. Kohli, playing his 63rd Test for India, became the fourth-quickest to 5,000 runs. He took 105 innings to reach this tally. Only Sunil Gavaskar, Virender Sehwag and Sachin Tendulkar, who took 95, 98 and 103 innings respectively to reach the landmark, have been quicker than Kohli to 5,000 runs.

Kohli had made his debut in 2011, and since then has climbed the ranks across formats to attain a stature matched by few in Indian cricket. He has so far scored 5,003 at an average of 52.11 with a high score of 235, and has 19 hundreds and 14 half-centuries under his belt.

It was only last week that Kohli recorded his 12th Test hundred as Indian skipper going past Gavaskar s tally of 11. During that innings Kohli also recorded his sixth 150+ score as captain, the most by any Indian captain. Gavaskar and Mohammed Azharuddin had 5 each. Kohli is now fifth on the list of hundreds scored by Indians, behind Tendulkar (51), Rahul Dravid (36), Gavaskar (34), Virender Sehwag (23) and Azhar (22). 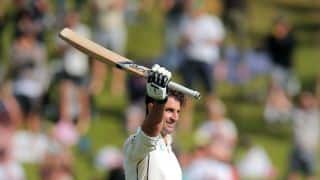