Sri Lanka has a daunting task ahead of them to qualify for the ICC Cricket World Cup 2019; need to win the remaining two ODIs.

With Sri Lankan cricket in complete tatters, following the resignation of their selection committee, the national side to set to take on India in the fourth ODI at R Premadasa Stadium, Colombo. Sri Lanka has a daunting task ahead of them to qualify for ICC Cricket World Cup 2019; need to win the remaining two games.

India, on the other hand produced two outstanding chases to take an unassailable 3-0 lead. Virat Kohli and Ravi Shastri have a lot on their plates with some benched players waiting to get a chance on the field. As hinted in the interview after the 3rd ODI, Kohli will be looking to play reserve players: We have a squad of 15. We ll look to give some of the other guys a go. Having won the series already, we can afford to give those guys a go.

With India s batting still looking a bit shabby in the middle, the likes of Manish Pandey and Ajinkya Rahane could get a look-in for Kedar Jadhav or KL Rahul. Jadhav has had a torrid time with the bat, while Pandey is coming off a great run from India A tour of South Africa. Another change that one could see is the inclusion of Kuldeep Yadav in place of Akshar Patel: it will be a horses-for-courses change.

Shardul Thakur can replace Jasprit Bumrah as well. The remaining two ODIs are perfect opportunity for India to experiment ahead of Australia s limited-over series in India.

Lasith Malinga had led Sri Lanka to the 2014 World T20 title. He will now lead them in ODIs, Malinga will take over from Chamara Kapugedera, who has been ruled out of the series following a back spasm. Apart from an injury, Kapugedera will also be facing a probe regarding his decision to bat first at Kandy as team decision was to bowling first if Sri Lanka wins the toss. Sri Lanka have roped in Dhananjaya de Silva and Dilshan Munaweera.

Malinga himself has not been in the best of form. However, he looked decent in the previous encounter taking his 299th ODI scalp. In all likelihood Dhananjaya will come in for the injured Dinesh Chandimal, while Munaweera can be drafted if Danushka Gunathilaka does not pass the fitness test.

Sri Lanka will have to rely on their bowlers, mainly Akila Dananjaya, to rattle a nervous Indian middle-order. Vishwa Fernando and Dushmantha Chameera bowled tightly in the last ODI before dominated by Rohit and Dhoni. 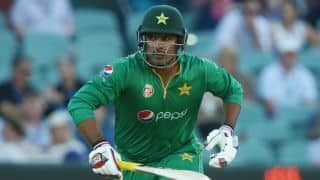