India vs Sri Lanka, 5th ODI, preview and likely XI: Will visitors rest Virat Kohli to give Rohit Sharma a

If Virat Kohli has had enough games to get acquainted, shouldn't India rest him and give Rohit Sharma a chance to call the shots? Like they did with the ones who were benched.

India have had no mercy on the feeble Sri Lankans since the past month. Shikhar Dhawan, Rohit Sharma, Virat Kohli have been hostile with their willows. MS Dhoni then has been adding more fuel to the fire with his new makeover. The often-shuffling bowling unit has had no troubles either. Decimation, absolute decimation, it has been by the Indians.

I cannot pinpoint one reason as to why this keeps happening. Mind you, this is the same team that chased 322 in England against the same opposition and won. Definitely we are not short of skill, but we lack confidence at the moment, former captain Angelo Mathews said, according to a report published in cricbuzz.

What can be the reason? Injury is definitely one of the many, but that is something the Sri Lankans cannot manage. They instead are mentally down and in dire need of confidence. Where do you get that? Self-belief can be a path to regain the lost mojo, but the Indians have wiped out whatever is left of the Sri Lankans.

We would like to win the next game. Whatever we can control we have to control. We seniors have to lift our games as we have not lived up to expectations, he concluded, stating the obvious.

It is not his fault, but the Sri Lankans collectively have been focussing too hard on finding the chinks than narrowing down what they have. With five-ODI series already lost 0-4, the lowly Sri Lanka will have to leave everything behind and eye on victory, something they have been ruthlessly deprived of.

India gave opportunities for the benched players after they sealed the series in the third contest. However, Kohli s new deputy, Rohit Sharma, has not had the opportunity to call the shots. Hence, the question beckons: if Kohli has had enough games to get acquainted, should India rest him and give Rohit a chance? Let us have a look at India s probable XI.

Note: Shikhar Dhawan has flown back to India to meet his ailing mother.

Sri Lanka, however, have had 5 captains since Mathews resignation. Lasith Malinga, who took them to triumph n 2014 WT20, was at the helm now in the previous contest, but he too could not resurrect his fallen team. That said, Upul Tharanga is done with his two-match ban and will captain in the last ODI.

Quote unquote: In all four ODIs, almost everyone in the top six batsmen have taken starts. However they could not go on to get a big one. It is these small things that matter. These guys are still young and they need to learn, and fast. – Batting coach Avishka Gunawardene 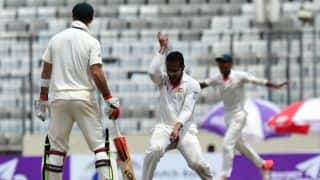