Unless Sri Lanka can manage to play well above their current game India will stomp past them, presumably right into the final of Asia Cup T20 2016.

India and Sri Lanka will clash again for the fourth time in the last couple of months when they take field for Match 7 of Asia Cup T20 2016 at Dhaka on Tuesday. India have been a dominant force in Twenty20 Internationals (T20Is) in recent months, continuing their excellent form where they beat Australia 3-0 in their own backyard and then beat Sri Lanka 2-1 at home. India have won 7 of their last 8 T20Is, the only loss coming against Sri Lanka on a dicey pitch at Pune. That loss proved to be a wake-up call for India; their subsequent endeavours on tough pitches have produced positive results. Live Cricket Scorecard: India vs Sri Lanka, Asia Cup T20 2016 Match 7 at Dhaka

India have blasted past both Bangladesh and Pakistan, arguably the tougher sides in the tournament than Sri Lanka and UAE, and sit confidently at the top of the points table. After handing Bangladesh a 45-run thrashing in the opening match of Asia Cup 2016 India, led by another Virat Kohli master class, went on to overcome a spirited Pakistani pace attack and prevail by 5 wickets. The protagonists of India’s victories have been Rohit Sharma and Virat Kohli with the bat, but more importantly the entire bowling unit has come together as a cohesive whole. READ: Virat Kohli overcomes mental barriers; gives testament of his supremacy with bat against Pakistan

Shikhar Dhawan missed out in the second match with an injury, and even Rohit Sharma picked up a toe injury in the last match, but neither batsman is likely to miss out for long. However, India need their middle order to come to the fore sooner rather than later. Suresh Raina has not looked convincing in either match and will want to play a longer innings. READ: Hardik Pandya is proving himself an ideal all-rounder for India in T20Is

Yuvraj is a far cry from the batsman he once was, but he is using his experience well and playing second fiddle to the more in-form players. He managed to see India home against Pakistan despite looking completely out of touch. It would seem that Yuvraj’s new role in the side is to keep churning over the strike so the batsman at the other end can go big. It is a strategy that has worked so far, but Yuvraj needs to bring out his trademark shots more often. MS Dhoni has hardly had a bat, but remained unbeaten in his last three innings. India are unlikely to make any changes unless forced to due to injury, with Dhawan returning for Ajinkya Rahane if fit.

Sri Lanka, meanwhile, are under immense pressure. Having beaten UAE they got off to a good start in the tournament only to run into the dominating hosts Bangladesh. Sri Lanka’s lack of batting firepower continues to haunt them. With Tillakaratne Dilshan showing no signs of regaining form, the weight of expectations falls solely on Dinesh Chandimal. Angelo Mathews has not had much of international batting practice over the last few months and his rustiness showed against Bangladesh. READ: Asia Cup cricket: 10 incidents etched in memory

The only bright spot for Sri Lanka is their bowling, but even that suffers in the absence of Lasith Malinga. Nuwan Kulasekara is still a wily customer, though his swing seems to have gone the Bhuvneshwar Kumar way. Dushmantha Chameera continues to impress with every outing, and in Dasun Shanaka and Thisara Perera they have good bowling all-rounders. Sri Lanka also have a host of spinning options to choose from in Rangana Herath, Milinda Siriwardana, Shehan Jayasuriya, Dilshan, Sachithra Senanayake, and Jeffrey Vandersay. READ: VVS Laxman: Asia Cup ideal dress-rehearsal for ICC World T20 2016

On the whole it would seem India go into the match as firm favourites. Unless Sri Lanka can manage to play well above their current game India will stomp past them, presumably right into the final. India are already virtually through to the final, with UAE to play after Sri Lanka. At this point in the tournament it seems it will be a two-way battle between Pakistan and Bangladesh. The only way Sri Lanka can enter the fray is by beating India — a task that is far from easy.

Video: An angry, confident Pakistani fan claims he will make India pay if given chance 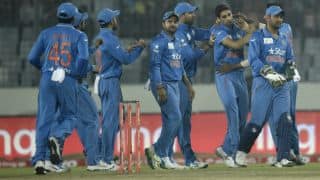