India vs Sri Lanka, 1st ODI, Live Streaming: Virat Kohli and co. look to continue their winning spree as they begin the limited-over series against Sri Lanka at Dambulla.

Virat Kohli and co. look to continue their winning spree as they begin the limited-over series against Sri Lanka at Dambulla. India are set to witness a few changes to their squad with the return on MS Dhoni, Jasprit Bumrah and likes. Sri Lanka is set to see change of gear with Upul Tharanga taking over the captain’s role. The live cricket streaming of the match will be available on Sony LIV, while the live telecast of the match will be available on Sony SIX and Sony Six HD, along with the Hindi commentary on Ten 3 and Ten 3 HD. In USA, the live streaming will be available on Willow TV Online, along with the live telecast on Willow TV.

Test cricket was clinched without much strain and with the beginning of the ODI series, India will look to find the core of the World Cup 2019. Dambulla has not been a pleasant hunting ground for India. Since 2004, India have played 17 ODIs here and have 9 of them that included bilateral as well as triangular series. It also includes Asia Cup 2004 and 2010. As for the head-to-head record, India have only 4 off the 11 ODIs played here. Also one of the highlights here at Dambulla was their game in 2008 when Virat Kohli made his debut. Now, he returns to the place not just as top limited-overs batsman but also as a captain. But we cannot erase the fact that Sri Lanka’s greatest achievement despite a low graph in the ODIs was when they thrashed by 7 wickets in the Champions Trophy at the Oval.

Sri Lanka can only hope to replicate the same innings and play to the advantage of their conditions. Another two victory in ODIs could take them closer to World Cup 2019. 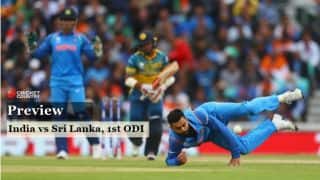