Incessant rains resulted in the first ODI, between India and West Indies, being abandoned.

Leaving off-field controversies behind, India commenced their 5 One-Day International (ODI) series against West Indies. The first ODI was being played at one of India s happy hunting ground in West Indies, i.e. Port of Spain, Trinidad. West Indies put India to bat on a slow and two-paced wicket. It was the opening pair of Shikhar Dhawan and Ajinkya Rahane who took charge and got the side off to a flier, adding 132 runs for the opening wicket. Sadly for India, rains followed them from England to the Caribbean Islands ensuring no further play after 39 overs with the score reading 199 for 3 . As a result, the was called off with long rain interruptions and unfit ground conditions. Full Cricket Scorecard: India vs West Indies, 1st ODI

Rahane and Dhawan, especially the former, took some time to get their eye in and move on. Dhawan, riding on his impeccable ODI form off late, continued to make merry. The pair got going and crossed the 50-run mark in 10th over.

To add to the records, this was also the first instance of both Indian openers scoring fifties in West Indies. However, against the run of play, Rahane departed for 62 after Alzarri Joseph deceived him with a slower ball. He was early into the shot and managed to give Holder an easy catch at mid on.

His wicket saw Virat Kohli join Dhawan in the middle. The pair added 36 runs in as many balls before Dhawan (87) was trapped leg before by Devendra Bishoo. Dhawan did challenge the decision but DRS had the last laugh. He eventually made 87 off 92 balls.

Yuvraj Singh came at No. 4. On the score of 2, Yuvraj became the first Indian player to 500 ODI runs in West Indies. Nonetheless, the southpaw had a short stay in the middle, falling for 4 off 10 deliveries. With MS Dhoni s arrival, even rain decided to make its presence felt and play was halted with India 189 for 3.

After a gap of 45 minutes, game resumed for an over before another rain interruption. India, by then, had piled up 199 for 3 with Dhoni (9*) and Kohli unbeaten on 32. Incessant rain meant play being called off.

For India, Kuldeep Yadav made his ODI debut. Kuleep become only the second left-arm chainman from Asia, after Sri Lanka s Lakshan Sandakan, and the first chinaman bowler from India to don the natioanl jersey in ODIs.

Both sides will now take on each other on June 25, Sunday, at the same venue in Queen’s Park Oval. 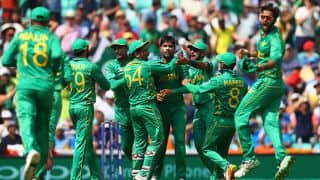