Indian skipper MS Dhoni, who is coming off a couple of months long break said he is raring to go, as he had had enough time to prepare for the series against West Indies.

Former World champions India have won the coin toss and elected top bowl first, against the reigning world champions West Indies, in the first of the two-match Twenty20 International (T20I) series, at the Central Broward Regional Park Stadium in Lauderhill, Florida on Saturday. Indian skipper MS Dhoni, who is coming off a couple of months long break said he is raring to go, as he had had enough time to prepare for the series, while the Windies skipper Carlos Brathwaite too is excited ahead of the series. Meanwhile, Chris Gayle and Jason Holder have been rested for the tie. FULL CRICKET SCORECARD: India vs West Indies 2016, 1st T20I at Florida

No more empty seats. No more one-sided contests. No more boredom. This time, there will be reggae music in the background. We will see cheerleaders often shake a leg to Dwayne John (DJ) Bravo’s Champion. And of course, Virender Sehwag will be at his (T)wittiest best during the match. All in all, like Ravi Shastri would say, “It promises to be a crackerjack of a contest.” India and West Indies, ranked No. 2 and 3 respectively in ICC T20I Rankings, will battle with each other in two-T20I series at Lauderhill, Florida. Yes, the gentlemen’s game will be played in the United States of America. FULL CRICKET UPDATES: India vs West Indies 2016, 1st T20I at Florida

What baffles us is the number of hours Dhoni and few others travelled to play 6 hours of cricket. However, a man, for whom patriotism is second to none, a 64-hour journey is not big a task. All the same, does difference in time zone not make it difficult for one to adjust? Let alone the weather, one has to change the sleeping pattern and, thus, becomes sleep-deprived and eventually exhausted. In fact, we do not credit the sportsmen (and our countrymen, to be honest) enough for the hard work they put in. IND, WI set to dazzle at Florida – Preview

West Indies bat deep, so much so that every batsman in their team can use the long handle to the savaging effect. Early inroads will not put India on the front-foot. They will have to bowl out of their skins, punch well above their weight; use as many idioms you want, but that still will not fairly articulate West Indies’ batting prowess. To make matters worse for India, the opposition have Sunil Narine in their arsenal. His numbers deserve a mention here. From 34 T20Is, he has scalped 40 wickets at 17.75. Be that as it may, his economy reads 5.69 in a format tailor-made for batsmen. Dhoni believes USA is a ‘special’ market for cricket

The 14-member Indian team will see the return of as many as 11 regular players who were rested from the tour to Zimbabwe in May earlier in 2016. Dhoni, who retired from the longest format of the game in December 2014, is scheduled to play just seven more matches in 2016 — two T20Is against the West Indies in USA and 5 ODIs against New Zealand in India, reports PTI. 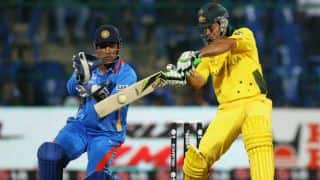