"I won't risk Hanuma Vihari's career at the top of the innings," said the former India opener.

Former opener Gautam Gambhir is not a fan of Hanuma Vihari opening the innings for India in the West Indies. Although India have specialist openers in KL Rahul and Mayank Agarwal who are likely to start in Antigua the idea to perhaps use Vihari at the top has not been discarded entirely to accommodate as it gives the opportunity to slot both Rohit Sharma and Ajinkya Rahane in the Playing XI.

READ: Ganguly wants Pant to play ahead of Saha

The memory of Vihari opening the innings for India in Melbourne last December is still fresh is most minds. Batting first, with Mayank Agarwal, Vihari blunted the new-ball attack comprising Mitchell Starc and Josh Hazlewood. India added 40 runs on a swinging MCG surface in 18 overs but had more importantly, not lost a wicket. A century from Cheteshwar Pujara and fifties from Agarwal, Virat Kohli and Rohit helped post 443/7, a total which proved enough as India retained the Border-Gavaskar Trophy with a 137-run win.

Vihari ended up scoring 8 and 13 in Melbourne, but has mostly batted at No. 5 in the remaining three Tests for India. Gambhir reckons facing the Duke’s ball is not going to be easy for India first-up, because of which making Vihari open against West Indies pacers might not be in the best of interest for the 25-year-old batsman.

READ: The dilemma facing India ahead of 1st Test

“Indian batsmen too will have to show good skills as the elements are vastly different in Test cricket in West Indies. To start with the decision of the hosts to stick to Dukes cricket ball is a good one. Earlier, West Indies used to play with the Kookaburra. Dukes cricket balls are manufactured in the UK. They present a stricter challenge for the batsmen as compared to the Kookaburra brand. When West Indies beat England in the recent home series the wickets were a lot juicier. I hope it continues to be that way for this contest as well,” Gambhir wrote in his column for Times of India Thursday.

“Given these elements, India should go with KL Rahul and Mayank Agarwal to open the innings. I won’t risk Hanuma Vihari’s career at the top of the innings.”

The build-up to the first Test has also circled around Rahkeem Cornwall, the 140-kg allrounder who seems set to make his Test debut on Thursday. Gambhir weighed in on Cornwall, whom he had first head of back during his days with IPL franchise Kolkata Knight Riders as captain.

“It is not surprising that some of the pre-Test match hype has been devoted to the waist size, height and weight size of Rahkeem Cornwall. With a weight of around 140 kgs and a height of 6 feet 6 inches, it is not at all surprising that he is getting due attention. I first heard of him from Sunil Narine when I was with KKR. I think we were chatting about spin bowlers in the West Indies when Sunil mentioned Rahkeem to me. I haven’t seen much of him but little evidence suggests promise especially with the ball in hand. He is said to have good control over his off-spin, ” Gambhir added.

“Those who know Rahkeem well claim that he is a hardworking guy. He is quite severe on himself in a gym. One of his senior team-mates went on to say: ‘A lot of people make fun of him because of his size, but I can tell you he can be a beast in the gym. He lifts a lot of weight, and I’m sure that if he puts his mind, he can be an Olympic weightlifter. He does a lot of running on the treadmill.’ At least the guy is hungry for success. Let’s see if he gets to show his skills in the Test match.” 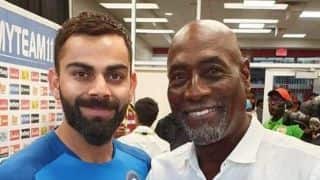 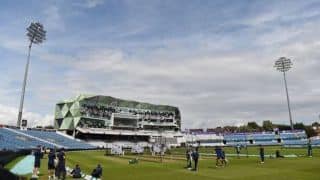