Shaw dedicated the innings to his father, who has been at the forefront of his cricketing journey since a tender age.

Prithvi Shaw, the youngest specialist Indian batsman to be handed a Test debut since Sachin Tendulkar in 1989, has revealed that he was annoyed at getting out just moments before the tea break at Rajkot.

Shaw, having hit 134 off 155 balls to become, at 18 years and 329 days, the youngest Test debut centurion for India, popped back a return catch to West Indies legspinner Devendra Bishoo three minutes before the tea break, which left India at 232/3 in the 51st over of the first Test.

The wicket was good and I should have kept batting. I should have been a bit careful as there were only 10 minutes left before tea, Shaw said after the day s play. Feeling really good now, after the hundred. I was a bit nervous to start off but when I got in, I got comfortable. I just tried to play my natural game. I was just thinking that it’s another game for me and then it just happened. How am I suppose to bat as it was my first game. I played the balls on merit and kept on going from thereon.

Shaw opened his account with a drive into the off side for three, and then found himself advising his opening partner KL Rahul to review an lbw verdict in the opening over of the Test. It proved a bad call, as replays showed Rahul was trapped in line for 0, but what followed was special for Shaw and India.

The teenager added 206 for the second wicket with Cheteshwar Pujara, in the process reaching a century on Test debut off 99 balls. Shaw dedicated the innings to his father, who has been at the forefront of his cricketing journey since a tender age. Shaw s cricketing graph since, at the age of 14,he smashed 546 off 330 balls for Rizvi Springfield High School in the Harris Shield has seen him break into the Mumbai team and score a century on Ranji Trophy debut and then on Duleep Trophy debut.

I was thinking about dad, as he has sacrificed a lot for me. First hundred, it’s all for him, said Shaw. Playing for India, it was a big thing for me. It was a good challenge for me and I think I did well in front of these guys. From the smaller age I used to play a lot of school cricket. I have played a lot of cricket in Ranji and it just keeps going on with so much cricket around. All that experience has helped me. 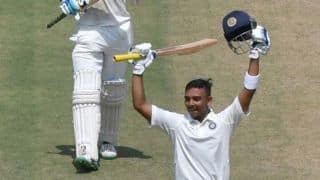