Hello and welcome to CricketCountry's coverage of Day One of the first Test between India and the West Indies at the Eden Gardens, Kolkata. I am Nishad Pai Vaidya and will take you through the day's play. At the outset, all the talk is about Sachin Tendulkar, who is playing his penultimate Test match. The fanfare has been humongous in the city of Kolkata. But, as we know, there is a serious game of cricket ahead of us. Read our preview to the contest. 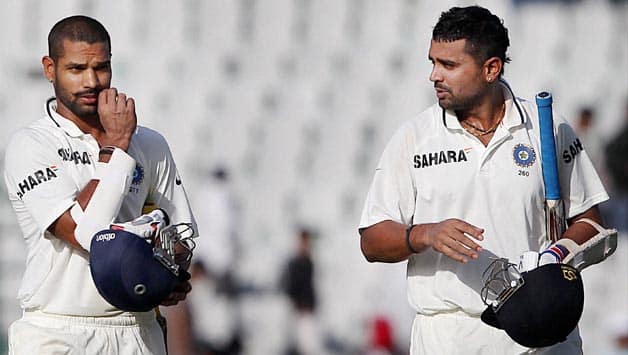 Kieran Powell was hit on the knee at short-leg. Dhawan’s sweep hit him there and he was in considerable pain. India have had a look at both Shillingford and Permaul on the day and they would be prepared for tomorrow.

That is the end of Day One. Do join us tomorrow. It could be the day we may watch Sachin Tendulkar bat.

India’s innings starts with Shikhar Dhawan pushing one through gully for four. Murali Vijay gets a few short ones from Tino Best and lets them go through. Sheldon Cottrell’s first ball in Test cricket is worked to the boundary by Dhawan. The Indian openers have started off very well and have smashed a few boundaries to get going.

Mohd Shami best figures by an Indian paceman on debut on the opening day since Mohd Nissar’s 5/93 at Lords way back in 1932! #IndvsWI

Shami has a four for on debut as he castles Sheldon Cottrell to finish the innings. West Indies have been bowled out for 234. They have lost the last eight wickets for 96. This is a disappointing total considering the start they had

Chanderpaul is out! Ashwin gets his man. He goes on to the back foot and missed one that turns away from him a touch. All the while, he looked so assured but it was that one ball that got through! West Indies are nine down now. Sheldon Cottrell to come.

Tino Best, who held the record for the highest score by a No 11 is in the middle with Chanderpaul. He would want to regain that record from Ashton Agar and perhaps this is a stage. After all, he has got a promotion as he is batting at ten. He has scripted a few good strokes so far,

Ashwin gets Permaul. He is early into a drive and lobs the ball straight back to Ashwin.He did not judge the ball properlu and merely went with the shot. The ball went to Ashwin for an easy catch as India make further inroads.

Permaul drives Tendulkar for four. A good cover-drive that pierces the field perfectly. The usual Tendulkar variations are on show. Permaul shows that he can bat as he nails another cover-drive off Ashwin.

Chanderpaul breaks a bail while trying to mark his guard. Would have happened at some point of time. Ojha gets Shillingford to edge one, but it falls short of the first-slip.

Ian Bishop is impressed by Shami. Here is what he tweeted:

This has been a serious spell of seam bowling from Shami. Flat pitch and he has changed the course of the innings.

Darren Sammy! What have you done! He was going along smoothly and getting boundaries with ease, but then he has a brainwave. Despite the long-off on the boundary, he charges at Ojha and lofts him straight into the hands of Bhuvneshwar on the ropes. Shane Shillingford is the new man.

Chanderpaul gets into his stride. With that typical square on stance, he walks in and drives Shami through the covers twice to pick up two boundaries. There isn’t anybody who can bat with that style but him.

Ramdin gone too! A similar ball that got Samuels. It pitches on a good length and comes back in a fraction. But, Ramdin is late to get his bat down as the ball clatters into the stumps. West Indies have now lost three in quick time. Darren Sammy, the captain is out there. Shami is on song today!

Double blow for West Indies! Bravo is run-out. It was suicidal. He flicked Ojha to the leg-side and ran without seeing where the ball had gone. Shami comes in and throws the ball to Dhoni as Bravo is short. A big breakthrough for India again. Two set batsmen out.

Denesh Ramdin edges the first ball he faces, but it goes wide off first-slip. Ashwin sighs as he could have had his man.

Dominance from Samuels comes to an end! He first rocks back to cut Ojha through point for a four. Later, he smashes Shami Ahmed over the covers for another four. But, Shami hits back! Samuels stays on his crease and an in-coming delivery pegs back his off-stump.

Shivnarine Chanderpaul is the new man in. He grows roots at the crease against India.

In a very quiet phase, the focus has shifted to Sachin Tendulkar again. He was seen signing autographs on the boundary for a few ball boys. Ojha then pitches it a bit short to Bravo and as it turns in, he rocks onto the backfoot and carts it for four through the off-side.

Samuels moves to 49 with a graceful cover-drive for four off Ojha. He then takes a single to reach his 50 off 61 balls

Samuels has taken a liking for Pragyan Oha. He goes inside-out over long-off as the ball sails into the stands. He then goes over cover and gets four. Bravo wouldn’t want to merely watch from the other end as he too joins the party. Ashwin’s flighted deliveries are smashed over long-off. One goes into the stands, while the other fetches four.

The hundred comes up with Samuels driving Bhuvneshwar for four through wide mid-off. So, West Indies have finished on 107 for two at lunch.

Samuels gets an edge, but it falls short of the slips and trickles to the fence. Dhoni takes off the third-slip and puts Cheteshwar Pujara at third-man. Pujara is instantly in play as Bravo flicks one through the leg-side. Pujara puts in a spirited dive to stop the bal from going to the boundary.

Pragyan Ojha is welcomed into the attack as Samuels dances down the track and hits the first ball for six over mid-on.

Shami is persisted with and has troubled the batsman. Samuels does get a few boundaries, not all of them are convincing though.

Not too many people at the ground:

There seems to be 199 people at the ground also.

Shami Ahmed gets his first Test wicket. A ball climbs on to Powell and he tries to pull it. He only manages to get a top edge which flies to mid-off where Bhuvneshwar Kumar takes the catch. Powell was looking good and he would disappointed that his innings had to end in that fashion.

Bravo gets off the mark by working one through the leg-side of Bhuvneshwar. Powell is looking in very good touch as he drives through the covers off the backfoot to pick up four. Bhuvneshwar strays onto his pads and Powell flicks him through the leg-side. But, the most impressive shot is one he essays through mid-off. On the back-foot, he just punches it and the fielder could hardly move.

Ashwin comes into the attack in the 10th over. Gayle tries to work the first ball through the leg-side, but edges it through point for a single. Kieran Powell then dances down the track and lofts it high over Ashwin’s head for a six. It was beautifully timed and goes all the way. Off the last ball of Ashwin’s first over, Powell dances down again and hits it over mid-on for four. Ashwin concedes 11 in his first.

Gayle falls as he edges Bhuvneshwar to second slip. he has been troubling him with movement and finally gets the rewards.

Gayle gets a few boundaries under the belt. He first hit one past gully for four. Then, Shami strayed on to the pads and Gayle flicked it through mid-wicket and Tendulkar couldn’t get it. He then had a stroke of luck as an inside edge went past the stumps and into the boundary.

Lots of interesting stats and figures coming in. This is Tendulkar’s 199th Test, but the other ten Indian players have played a combined total of 175. Sundar Raman tweeted this. There are many youngsters in this line-up such as Cheteshwar Pujara, Virat Kohli and now Rohit Sharma. You can read more about Rohit here.

Bhuvneshwar Kumar runs in to bowl the first ball and Chris Gayle edges it between gully and third-slip. The ball goes through for a four. West Indies are off and running. Bhuvneshwar is getting good movement away from Gayle. He does maintain a very good line against the left-handers.

Shami Ahmed bowls his first ball in Test cricket to Kieran Powell. The ball is outside the off-stump and Poweell lets it go through. The next ball comes back into Powell, but hits him high on the pads as he shoulders arms to that one. Powell pushes through the leg-side to open his account with a brace. Tendulkar runs after the ball and there are huge cheers from the crowd. Not a full house, but it is building.

In the third over, a tentative looking poke by Powell goes through the off-side for four. There was no danger there as he was fairly in control of things. West Indies have started off cautiously as both bowlers are getting some movement. While Bhuvneshwar is moving it away from Gayle, Shami is getting it to come in.

Sachin Tendulkar receives a memento from a Kolkata Police official. Familiar scenes, but in the next few days there would be too many of them. At the same time, don’t forget, Shivnarine Chanderpaul. The West Indies stalwart is playing his 149th Test match. So, when Tendulkar’s plays his 200th Test, Chanderpaul would play his 150th. West Indies have won the toss in the first Test against India at Kolkata and have elected to bat first. Rohit Sharma has been given a Test debut. Umesh Yadav, Amit Mishra, Ishant Sharma and Ajinkya Rahane are not playing. Shami Ahmed also making his Test debut.

Hello and welcome to CricketCountry’s coverage of Day One of the first Test between India and the West Indies at the Eden Gardens, Kolkata. I am Nishad Pai Vaidya and will take you through the day’s play. At the outset, all the talk is about Sachin Tendulkar, who is playing his penultimate Test match. The fanfare has been humongous in the city of Kolkata. But, as we know, there is a serious game of cricket ahead of us. Read our preview to the contest.

You can read more here about all the hysteria surrounding Tendulkar in Kolkata.