Welcome to CricketCountry's coverage of Day Two of the first Test between India and the West Indies at Eden Gardens, Kolkata. I am Nishad Pai Vaidya and will take you through the day's play. Yesterday was Shami Ahmed's moment in the sun. A brilliant spell of four for 71 bowled West Indies out for 234. India ended the day on 37 for no loss with Shikhar Dhawan and Murali Vijay in the middle. 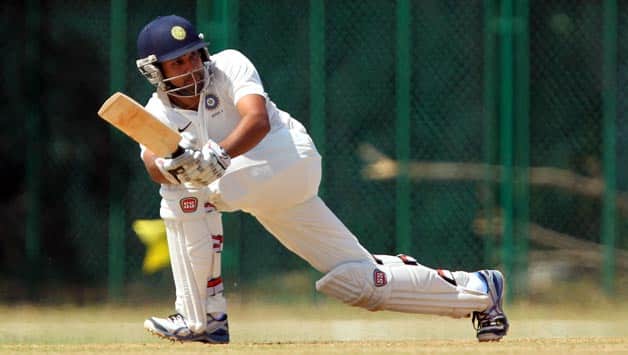 What a day it has been. India were outplayed completely by Shane Shillingford in the first session which included the wicket of Sachin Tendulkar. But the resurrection process by MS Dhoni and Rohit followed by the unbeaten 198-run stand between Rohit and Ashwin changed the complexion of the game. India are in complete control of this game with a 120-run lead and three more days to go.

You can read the Day 2 report here

Do join us on Friday morning in what could be another domination by India. Ashwin is inching to his second Test hundred.

Ashwin is also getting things going. Best bowls a short delivery and Ashwin pulls it with ease behind square. Rohit is an unstoppable force here. A ball outside the off-stump is beautifully carted behind point for a four. Another one is cut with disdain. He then follows it up with a beautiful cover-drive for four.

Rohit moves to 96 with a little help from Cottrell. He strays on to his pads and Rohit oflicks him past fine-leg for four. The crowd roars for his ton. The next ball is edged through the slip and it goes through for four. Here is a Test ton on debut. He then smashes the next ball through the covers for four. He looks at the heavens and realises his dream being fulfilled.

Rohit late cuts Shillingford behind point and it goes for four. The ton is certainly in sight. He then moves into the 90s with a well controlled sweep behind square. This partnership is now more than 130 and it is looking stronger with each ball.

This has been a very good partnership for India as it has helped them take the lead. This stand is now worth more than hundred and they have also taken India past 250. Ashwin got to his fifty as he drives through the off-side. And the hundred of the partnership us up with Ashwin flicking Permaul through mid-wicket for four.

India have taken the lead. Rohit Sharma levelled the scores with a boundary in the first over after Tea. Later on, Ashwin cracked Darren Sammy through the off-side to wipe off the defecit.

India end the session at 229 for six at Tea on Day Two. Rohit Sharma is unbeaten on 61 and and Ashwin is batting on 38.

IND 198/6 | Overs 61 | Rohit 53*, Ashwin 15*
Rohit has been batting very well and is in control of proceedings. Ashwin is batting confidently and is mainly giving strike to Rohit. He has looked solid and gets to his fifty with a cover-drive for four. He waited for this all the while and the delight on his face says it all. He waves his bat to the heavens and thanks the almight for this.

There are a lot of tweets on Nigel Llong

ECB now organising to have Nigel Llong snuck out of Kolkata. SAS helicopter, flown by a member of royal family, approaching. Sachin LBW

Dhoni is dismissed. Tino Best has his first wicket. It was overpitched outside the off-stump and Dhoni goes for it. However, he only manages to get an edge, which is accepted by Denesh Ramdhin. Ravichandran Ashwin is the new batsman.

Rohit drives one beautifully through the covers and it goes for four as Shillingford is unable to stop it.

Dhoni is continously sweeping Shillingford and doing it quite well. Even Rohit has watched Shillingford closely and he easily drives it through the off-side for four. This partnership is growing in confidence and the rotation of strike is helping them quite a bit. Dhoni completes India’s 150 with a single. Shillingford is not coming from round the wicket.

Dhoni is playing positively and is working the strike over. His footwork has been very positive against Shillingford. The off-spinner does hit him on the pads once, but the ball was going down the leg-side quite easily. The 50-run partnership is up. Dhoni has been the major contributor.

Rohit gets off the mark in Test cricket as he pulls Cottrell for a four. Dhoni has started in attacking mode as he is ready to sweep Shillingford. He dispatches one through the off-side for four and is continuing to attack Shillingford. Rohit also gets into his stride with a few good strokes, although an inside-edge missed his stumps and went for four. India end on at lunch on Day Two.

Bishan Singh Bedi has an interesting take to the story.

Kohli has gone or has he! There was an appeal for bat pad and as Kohli walked back, Nigel Llong asked him to wait. He checked for the no-ball, and there was a little bit behind the line. Kohli is unhappy. Umpire Llong in focus.

Bouncing a tad high to hit the stumps? Maybe, but no doubt Sachin was deceived by Shillingford. Up to Gen X now to salvage situation

This is a wicket Shillingford would never forget. Tendulkar doesn’t pick the doosra  and it hits him on the backfoot. The umpire raises his finger and Tendulkar has to walk back. Replays show that the ball hit him very high. Rohit Sharma walks out for his maiden Test innings.

Cottrell gets Pujara! A short ball climbs into Pujara and he tries to upper cut it. But, he only manages to give an edge to the wicket-keeper. Virat Kohli walks out to the centre. Again, all eyes are on Tendulkar through all this! Kohli gets off the mark by fetching two on the off-side.

Sheldon Cottrell is bowling and Pujara flicks him through the leg-side to fetch four. But, all the focus is on one man and that is Tendulkar, who moves into the double figures with a single through mid-wicket off Shillingford. Pujara then cuts Shillingford through point for a four. That would make him feel a lot better.

Best gets the ball to move in and hits Tendulkar on the pad first and then the bat. There is an appeal, but the ball had hit him outside the line of the off-stump. Ther is nervousness at the Eden Gardens, but Tendulkar eases it by pushing through the off-side and gets off the mark. Every run is cheered by the crowd. He gets his first boundary by pushing Shillingford through mid-wicket.

The next ball turns into him and keeps low. Tendulkar was shaping to push it through the off-side, but misses it. He then gets to the pitch of the ball again and gets another boundary through mid-wicket.

It is surprising that there isn’t enough crowd here:

Sachin is in,Eden is not full,so what was the hoopla outside the cricket all about? It was for his cricket no?

Murali Vijay has been dismissed and the crowd is cheering. You know why!  Vijay charged to Shilingford and missed it. Tendulkar walks out and the roar gets even louder.

Tino Best starts from the other end. Dhawan gets going by driving through the covers for a couple. However, Dhawan is out as he inside edges one from Shillingford onto his stumps. The ball didn’t bounce and Dhawan was on the back-foot. The previous ball had almost carried to the bowler for a return catch.

Shane Shilingford starts proceedings and is drawing Murali Vijay forward. The Tamil Nadu opener strides foward and gets behind the line comfortably. The last ball of the first over is pushed through long-on for a single as India open their account for the day.

Welcome to CricketCountry’s coverage of Day Two of the first Test between India and the West Indies at Eden Gardens, Kolkata. I am Nishad Pai Vaidya and will take you through the day’s play. Yesterday was Shami Ahmed’s moment in the sun. A brilliant spell of four for 71 bowled West Indies out for 234. India ended the day on 37 for no loss with Shikhar Dhawan and Murali Vijay in the middle.

Dhawan and Vijay looked in decent touch yesterday and they would be looking to charge today. They have batted together in Tests once before. Remember Mohali early this year? That was Dhawan’s day. Today, they are up against a different attack, the West Indies. Will their spinners leave a mark? Here is an article that discusses the West Indian spinners.