Bhuvneshwar Kumar was bowled by Marlon Samuels in the 31st over as India lost their seventh wicket.

Bhuvneshwar Kumar was bowled by Marlon Samuels in the 31st over as India lost their seventh wicket in huge chase. After being set a 322-run target, India have slumped to 139 for seven from 31 overs. India need another 183 runs to win from 19 overs.

This was after hikhar Dhawan was cleaned up by the West Indies bowler Marlon Samuels, as India slipped to 134 for six after 28.4 overs, in their opening One-Day International (ODI) match at Nehru Stadium in Kochi on Wednesday.

MS Dhoni has been bowled by Darren Sammy in the first One-Day International (ODI) between West Indies and India at Kochi. India are in deep trouble as they are chasing 322 and are currently 114 for five in 25 overs. Ravindra Jadeja and Shikhar Dhawan are in the middle. 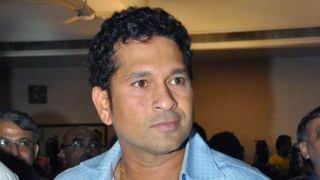