Marlon Samuels has batted very well and that has helped West Indies get the platform for a score over 300.

Marlon Samuels smashed a century, and he combined excellently with Denesh Ramdin to form the fourth highest One-Day International (ODI) partnership for West Indies against India, during the first ODI between India and West Indies at Kochi. The duo formed a 165 run partnership.

Bhuvneshwar Kumar was also carved by Samuels for a four behind point and then Ramdin also hit one through square leg. India had won the toss and elected to bowl first. Coming into this ODI, there was some uncertainty about the West Indies players featuring as there was a pay dispute, but that issue was put to rest and both teams took the field. 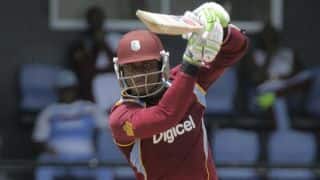