West Indies are batting first in the first ODI against India.

Darren Bravo and Dwayne Smith have put up a 50-run stand and are batting very well in the first One-Day International (ODI) against India at Kochi., In 17 overs, they are 92 for one.

Dwayne Bravo was dismissed in the eighth over and then his brother Darren Bravo came on. And then, Dwayne Smith got into the act and then he smashed the ball around. The duo put up their 50-run stand and in that Bravo had not scored too much. It was a partnership dominated by Darren Bravo. 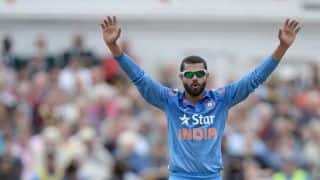